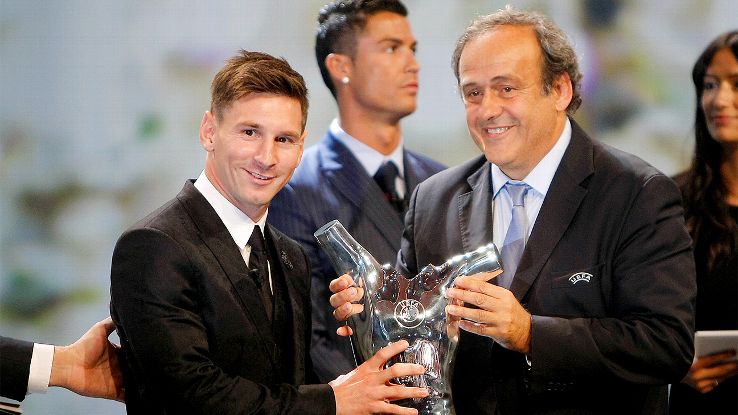 Barcelona’s Lionel Messi has received the UEFA Best Player in Europe Award for the second time after finishing ahead of Cristiano Ronaldo and Luis Suárez in a live poll of 54 journalists. Lionel Messi’s role in Barcelona’s treble-winning 2014/15 campaign has been acknowledged with the UEFA Best Player in Europe Award – the second time the forward has been honoured in the accolade’s five-year history. The Argentinian international accepted the trophy from UEFA President Michel Platini at the Grimaldi Forum in Monaco. Messi, recipient of the inaugural prize in 2011, finished ahead of Real Madrid’s Cristiano Ronaldo and club-mate Luis Suárez in a live poll of 54 journalists who selected, via an electronic system, their favourite from the three-man shortlist announced on 12 August. Messi, speaking after the UEFA Champions League group stage draw, said: “We’re a unified squad who worked very hard to achieve the goals we did. I’m very happy and I would like to thank my team-mates – without them I wouldn’t have achieved this.”

The 28-year-old broke Telmo Zarra’s record for Liga goals last term and ended the season with 58 in all competitions, a total swollen by a double in the Blaugrana’s Copa del Rey final triumph over Athletic Club. Barcelona’s No10 was also the ten-goal joint-top scorer in the UEFA Champions League alongside club colleague Neymar and Ronaldo. Messi, Ronaldo and Suárez had gained the most points from a second poll of the aforementioned journalists representing each of UEFA’s member associations, the three having initially been part of a ten-strong list revealed in mid-July that was the result of a first round of voting by the same reporters. Positions four to ten were already fixed after every reporter picked their top three players, with the first getting three points, the second two points and the third one.