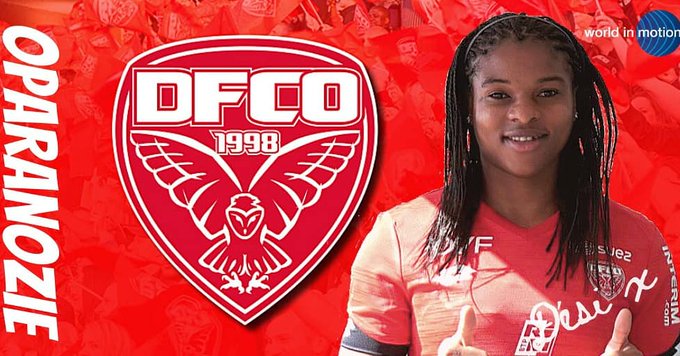 Super Falcons star, Desire Oparanozie on Tuesday signed for French side Dijon, according to a statement from the club. The Nigerian who had spent six years with Guingamp, another club in France, sealed a two-year deal with Dijon.

According to the club, Oparanozie’s arrival is part of efforts to “strengthen its workforce for the 2020/2021 season.” Speaking about the arrival of the 26-year-old former VfL Wolfsburg star, Dijon coach, Yannick Chandioux described her as “powerful,” adding that her experience will be invaluable to the club. “In addition to her experience and joie de vivre,” the coach told the club’s website, “Désiré has a fairly important athletic profile, she is powerful. She is a player who knows almost everything and who should be invaluable.” While reacting to her most recent move, the native of Owerri, Imo State, expressed delight in starting  “a new adventure” which she described as an honour. “Officially, I am now a Dijonnais. I am very happy starting a new adventure with this club,” she tweeted on her handle. “The object is to help my new team attain greater heights. Come on Dijonnais.” Dijon finished ninth on the league log last season.