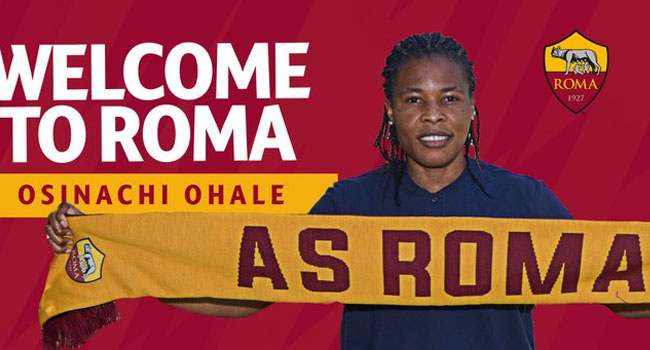 Nigerian defender, Osinachi Ohale has joined Italian side, AS Roma from Spanish club, Real Madrid. Ohale, 28, has featured for the Super Falcons at three World Cups and is the third signing for the Italian team as they prepare for the 2020-2021 season.

AS Roma had already signed Spanish forward, Paloma Lazaro and Italian goalkeeper, Rachele Baldi. “Welcome to the team, Osinachi Ohale!” the club said on its official Twitter handle. “The Nigerian defender becomes our latest addition this summer!” The player who was part of the Nigerian side that claimed the 2018 Africa Women’s Cup of Nations (AWCON), her fourth continental medal with the West African side, described the move to Italy as a great opportunity to explore and experience new things. “I chose Roma because of so many things; so many amazing things about the club, about this city and this country that interested me,” Ohale told the club’s website. “I felt like it would be a great thing for me, to explore and to experience new things and a new challenge.” A post on AS Roma’s website said she is “a tough, versatile defender” having also played for Houston Dash in the United States before featuring in the colours of Vittsjo and Vaxjo in Sweden’s top flight. On joining Real Madrid from Swedish side Vaxjo last September, she played 15 games, netting twice for David Aznar’s team before the Spanish league was cancelled due to the coronavirus pandemic. She was with Rivers Angels in the Nigerian Women’s Premier League and also Delta Queens where she was part of a double-title winning squad. AS Roma have already started their pre-season preparations and on Wednesday,  less than a month to the start of the Serie A Femminile season,  beat Fiorentina 4-0 in their first friendly game.