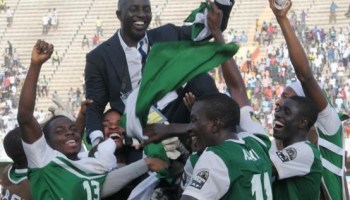 Nigeria’s  U-23 male team, Dream Team VI, have won the  African U-23 Africa Cup of Nations following a 2-1 win over Algeria in the final played last night at the at the Leopold Sedar Senghor Stadium in Dakar. Nigeria’s Etebo Oghenekaro  scored a  first half brace in the 15th and 40th minute while Segun  Oduduwa conceded an own goal  in the 31st minute in the pulsating match that saw  goalkeeper  Daniel Emmanuel  deny the Algerians a possible  equaliser  after  he caught  a penalty kick in the second half. Nigeria and Algeria will be joined the South Africa to represent Africa at the Rio Olympics next year. South Africa  defeated hosts Senegal 3-1 (penalties) in the third place play-off match.

Congrats to coach Siasia and his boys!