Former Chelsea and England left-back Ashley Cole has joined Major League Soccer side LA Galaxy. Cole, 35, will link up with former international team-mate Steven Gerrard after the defender’s contract with Roma was terminated by mutual consent. He joined the Italian Serie A side in July 2014 and made 16 appearances. “Whether you think it’s a risk or a gamble, these are the risks and gambles that you take,” said LA Galaxy head coach  and general manager Bruce Arena. Capped 107 times, Cole has won three Premier Leagues, seven FA Cups, one Champions League and one Europa League.

Liverpool have put in an offer for Schalke defender Joel Matip, Sky reports. Matip, a German-born Cameroon international is out of contract at the end of the season but Schalke want him to sign a new deal. It reported  that the player, who has scored three goals in the Bundesliga this season, has told his club he wants to leave. The 6ft 4in centre-back would be a strong addition to Jurgen Klopp’s defence, which has conceded 32 goals in 23 Premier League matches this season, the most of any club in the top 11. Liverpool may face a battle to secure his services with the Press Association reporting three weeks ago that at least two French clubs were also in the running for the 24-year-old.

Brazilian striker Alexandre Pato has arrived in London ahead of completing his six-month loan move to Chelsea. The Blues have agreed terms with the 26-year-old, with an option to make the move permanent in the summer transfer window.

Ramires has completed his move to Chinese side Jiangsu Suning from Chelsea for a fee of £25m. The Brazil international moved to Stamford Bridge from Benfica for £19.8m in August 2010 and went on to play 251 times for the Blues, scoring 34 goals in the process. Ramires helped Chelsea win every major domestic and European trophy during his time at the club, although he was forced to sit out the Champions League final victory over Bayern Munich in 2012 after being booked in the semi-final against Barcelona. The 28-year-old also featured in the Premier League and Capital One Cup double last season and only signed a new four-year contract in October. He has found game-time harder to come by under new boss Guus Hiddink, though, and has not played in the Premier League since the goalless draw at Manchester United on December 28.

Paris St-Germain striker Zlatan Ibrahimovic has been handed a 700,000 euros monthly pay rise. The 34-year-old Swede, who has scored 127 goals in 156 games since joining them in 2012, now gets 1.5 million euros a month before tax under the performance-based hike agreed late last year. Ibrahimovic will also get big bonus payments for winning the Champions league, the French league title and ending the season with the highest combined total of goals scored and goal assists.

Barcelona forward Luis Suarez says he would only play for Liverpool if he were ever to return to the Barclays Premier League. The 29-year-old left Anfield in a £75m move during July 2014, having scored 84 goals and come close to helping Liverpool win the title. Uruguay international Suarez told ESPN if he was to one day look to move back to England, it would only be for the Reds, having originally signed from Ajax in January 2011. “You never know what will happen in the future,” he said to ESPN. “If I was to return to England, it would be to play for Liverpool – not for any other team.” Suarez enjoyed a great relationship with Liverpool supporters, despite an often testing spell under the media spotlight. He added: “I have missed the fans. The (Anfield) atmosphere is incredible, it’s incredible. “Everyone that has played for Liverpool knows how important the supporters are. They know that they are in my heart.”

Brazilian striker Pato’s six-month loan move from Corinthians to Chelsea has been finalised, Sky reports. The Blues have agreed terms with the 26-year-old, with an option to make the move permanent in the summer transfer window. Pato’s current club Corinthians had reportedly stated they wanted the forward to move on and they now have their wish, although the deal has not yet been officially confirmed by Chelsea. Once touted as Brazil’s next rising star, Pato has 27 caps and 10 goals for his country but he has not made a Brazil squad since 2013. He signed for AC Milan in 2007 from Internacional and scored 16 Serie A goals in 43 performances but struggled towards the end of a five-year spell and returned to Brazil with Corinthians in January 2013. Corinthians moved him out to Sao Paulo on loan for the 2014 and 2015 seasons and he scored 19 times in 59 league games.

Chelsea and West Brom have been fined after being found guilty of failing to control their players during their Stamford Bridge meeting on January 13. The clubs were charged over a mass confrontation during the second half of the 2-2 Premier League draw, sparked by an incident involving Chelsea’s Diego Costa and West Brom midfielder Claudio Yacob. Yacob, who had already been booked, was quickly substituted by Baggies boss Tony Pulis after the game calmed down. Both clubs admitted the charge and Chelsea have been hardest hit, levied with a fine of £65,000, while West Brom were fined £35,000 with both clubs also being warned over their future conduct. An FA statement read: “The cases, which were considered ‘non-standard’ due to both clubs having committed similar breaches of FA Rule E20(a) within the preceding 12 months, were heard by an Independent Regulatory Commission on Monday [January 25, 2016]. “For incidents that are considered ‘non-standard’, it is at the discretion of the Commission to determine what sanction it deems appropriate and it may, where applicable, take into account any previous proven charge(s) of a similar nature.” 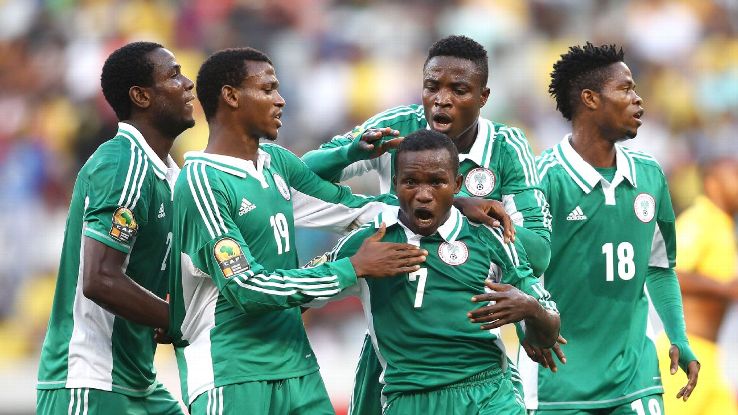 As Nigerians mourn the ouster of Nigeria from the ongoing African Nations Championship (CHAN) in Rwanda, let us remind us of the guys who first represented Nigeria in the tournament and gave a good showing. CHAN started in 2009 and is held every two years alternating with African Cup of Nations. Nigeria’s maiden appearance was at the 2014 edition held in South Africa. The home based Super Eagles were coached by Stephen Keshi as at then. Nigeria played in Group A alongside Mali, South Africa and Mozambique. The Super Eagles lost 2 – 1 to Mali in their opening game but went ahead to defeat Mozambique 4 – 2 in their second game. Nigeria later defeated hosts South Africa 3 – 1 in the last group game to qualify for the quarterfinal behind Mali. Nigeria’s quarterfinal game against Morocco was dramatic as Morocco led by three goals before Nigeria equalized and won 4 – 3 in a match that went into extra time. Nigeria would go on to meet a 10-man Ghana in the semi final and after a 0 – 0 normal time, Ghana won 4 – 1 during penalty shoot out. Nigeria defeated Zimbabwe 1 – 0 in the third place match to win the bronze medal.

END_OF_DOCUMENT_TOKEN_TO_BE_REPLACED

Leicester boss Claudio Ranieri is chasing CSKA Moscow striker Ahmed Musa after Inter Milan hijacked his bid for Sampdoria’s Eder. Ranieri is determined to bring in a goalscorer to help boost the club’s shock title bid and ease the burden on Jamie Vardy. CSKA want £19million for 23-year-old Musa after rejecting a £15m offer from the Foxes, who will up their bid. The highly-rated Nigeria captain has two and a half years left to run on his Moscow deal but is understood to be keen on a move to England. Musa has scored 10 goals in 29 appearances for CSKA this season. He has also netted 11 times in 56 appearances for Nigeria.

Liverpool won a penalty shootout against Stoke City at Anfield to reach the Capital One Cup final as manager Jurgen Klopp ensured his first season in charge will bring a trip to Wembley. Marko Arnautovic scored for Stoke to claw back Liverpool’s one-goal advantage from the first leg – but it was agony for Mark Hughes’ side when it came to spot-kicks. Much-criticised Liverpool goalkeeper Simon Mignolet was Liverpool’s hero with saves from Peter Crouch and Marc Muniesa, allowing substitute Joe Allen to step forward to secure a meeting with either Manchester City or neighbours Everton at Wembley on 28 February. A tight encounter was sent to penalties by Arnautovic’s goal, seemingly scored from an offside position, in first-half stoppage time. Jon Walters, Glenn Whelan, Ibrahim Affelay, Xherdan Shaqiri and Marco van Ginkel were all on target for Stoke, while Adam Lallana, Christian Benteke, Roberto Firmino, James Milner and Lucas were successful for Liverpool – before Allen settled matters to send Anfield wild in celebration.

Crystal Palace have signed striker Emmanuel Adebayor on a free transfer until the end of the season. Adebayor, 31, was available after being released by Tottenham in September and has scored 94 Premier League goals for Spurs, Arsenal and Manchester City. Two weeks ago, Palace boss Alan Pardew confirmed his interest in signing the Togo international. The Eagles have failed to win their past six games, losing their last four in a row, and Adebayor is the club’s first signing of the transfer window. Pardew made a failed attempt to sign the player in 2006 when he was in charge at West Ham. Adebayor instead joined Arsenal from French club Monaco. He then went on to play for Manchester City followed by a loan spell at Real Madrid before joining Spurs in 2012.