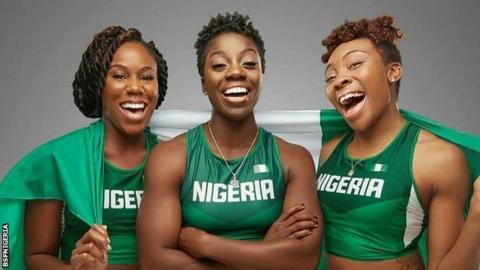 Nigeria’s women’s bobsleigh team will make history in Pyeongchang as the first African sled to compete at the Winter Olympics. Seun Adigun, Ngozi Onwumere, and Akuoma Omeoga hit the qualifying standard in November but needed to maintain their world ranking until 14 January. Nigeria will be represented for the first time at the Winter Olympics. Simidele Adeagbo will also fly the West African nation’s flag in the women’s skeleton. All three bobsledders were once track and field athletes before switching to winter sports, with Adigun competing in the 100m hurdles at the London 2012 Olympics.

Adigun will pilot the Nigerian sled in South Korea with either Onwumere or Omeoga to be selected as brakewoman. “It’s surreal,” said Adigun, speaking in November. “One of the things that you aspire to is to have a podium spot with respect for the process and respect for the learning curve of what it is that we’re actually doing.” Adeagbo, 36, only took up skeleton four months ago but will compete in Pyeongchang after finishing third in her two races at the North American Cup in Lake Placid, New York at the weekend. The Canadian-born slider – a former triple and long jumper – first expressed an interest in bobsleigh but was encouraged to try skeleton instead.