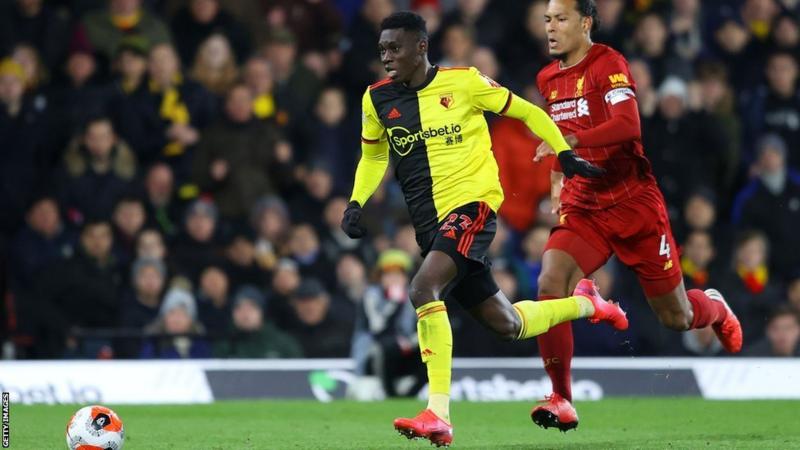 Two Senegalese clubs are to protest against English Premier League team Watford to FIFA, saying they have not received sell-on payments owed after Ismaila Sarr’s transfer last summer. Senegal winger Sarr joined the Hornets from Rennes in August 2019 for a reported club record fee of £30m. Both Linguere de Saint-Louis and Generation Foot say they have not had the first of five solidarity payments for the 22-year-old’s move. Watford chairman Scott Duxbury said they have been “thwarted” by “insufficient banking detail” regarding one of the payments, while the Hornets have had “direct and regular contact with the other party with a view to imminent resolution” in relation to the other payment.

Generation Foot’s president, Mady Toure, said it was “disrespectful from Watford” that his club had not received their payment. “They promised us a certain amount of money – 525,000 euros split in five payments,” he said. “Since January, we have sent several emails without any answer from them. They also sent a transfer order to my fellow president of Linguere de Saint-Louis and since then he didn’t receive anything.” Linguere de Saint-Louis, based in the north of Senegal, were Sarr’s first club. They are leading the country’s second tier and were close to securing promotion when all football was stopped because of the coronavirus pandemic. “We’ve seen several transfer orders but no money – so it confirms my theory that they are teasing us to buy time,” the club’s president Amara Traore said. “I’ve all the scheduled payments from the financial director of Watford: the first payment was due 17 November, then it’s every 31 August from 2020 to 2023. “Our budget is around 120m FCFA and they owe us 57m FCFA split in five payments – so it’s half our annual budget. “We will go to FIFA.” The solidarity contribution rule is a FIFA mechanism which enables 5% of the transfer fee to be shared proportionally between the clubs a player was at between the age of 12 and 23. Toure said Watford officials had told him the payments were delayed by the closure of the English Football Association offices during the coronavirus crisis. “I am pretty sure you don’t need to go to the office to send a bank transfer,” he added. “Let’s be serious. This first payment was supposed to be done 10 January, so that reason is inadmissible. “FIFA should give them severe sanctions. We were expecting something better for a club of the number one league of the world.” Watford is owned by the Italian businessman Gino Pozzo, also owner of the Italian side Udinese Calcio. Toure said Pozzo had approached him wanting to buy another player, but he had refused because the Sarr money had yet to come in. “I don’t doubt Watford is a serious club but I can say they have a lack of respect to us,” he added.