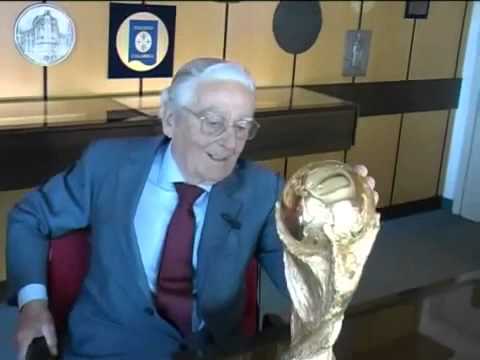 Silvio Gazzaniga, the sculptor who designed the World Cup trophy, has died. He was 95. Gazzaniga’s son, Giorgio, said his father passed away in his sleep at home in Milan. “He just didn’t wake up this morning. It was a peaceful death,” Giorgio Gazzaniga told The Associated Press on Monday, adding that his father had been in the hospital recently for a series of minor ailments. Silvio Gazzaniga designed and created the World Cup trophy in 1971 after Brazil retained the right to keep the Jules Rimet trophy by winning its third World Cup in 1970. “The World Cup is a mythic object for the players and for all football lovers,” FIFA President Gianni Infantino said. “We will be eternally grateful. I express my condolences by joining the pain of the family.” The 18-carat solid gold trophy weighs approximately six kilograms (13 pounds). It depicts a moment of joy: two players celebrating with their arms outstretched and a globe resting on the backs of their shoulders.

“The lines spring out from the base, rising in spirals, stretching out to receive the world,” Silvio Gazzaniga once said, according to FIFA’s website. “From the remarkable dynamic tensions of the compact body of the sculpture rise the figures of two athletes at the stirring moment of victory.” FIFA received 53 proposals from seven different countries for a new trophy, before opting for Gazzaniga’s design. “I designed it to reward heroism,” Silvio Gazzaniga said in a 2002 interview with The Associated Press. “But not superhuman heroism. It’s not a conventional cup.” Giorgio Gazzaniga said that his father knew his design couldn’t be understood on paper, so he brought a plaster model to show FIFA. “The jury understood right away that it was a very photogenic cup,” Giorgio Gazzaniga said. “It’s easy to lift and beautiful when raised. He created a universal trophy.” The FIFA contest stipulated that the winner would not hold the rights to his work and so Silvio Gazzaniga never profited directly from images of the World Cup trophy. “But as compensation he gained more work on other cups,” his son said. “He became Mr. Cups.” Silvio Gazzaniga also designed the UEFA Cup, European Super Cup and many other international trophies. But he’ll be remembered above all for the World Cup. Cafu, who captained Brazil to the 2002 World Cup title, tweeted, “Today I think for Silvio Gazzaniga, this man designed the trophy which gave my proudest moment in sport. RIP.”Silvio Gazzaniga leaves behind two children, along with grandchildren and great grandchildren.