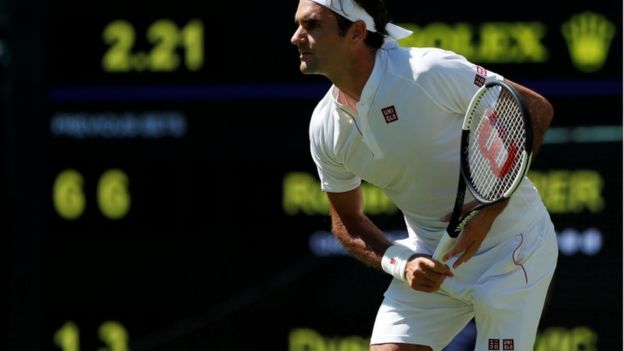 Tennis legend Roger Federer has signed a deal with Japanese clothing company Uniqlo after ending his decades-long partnership with Nike. The new contract is reportedly worth $300m (£228m) over the next 10 years and was signed after Federer’s deal with Nike expired in March. The tennis star donned the Japanese brand at his Wimbledon match on Monday, but for now has kept his Nike shoes. The 36-year-old Swiss player first signed with Nike in 1994. Sports news site ESPN reported the price tag of Federer’s new deal, but Uniqlo has not shared the specific terms.

“I was excited to wear Uniqlo today,” the 20-time Grand Slam winner said after his match on Monday, the Wall Street Journal reported. The star athlete added that the partnership had “been a long time coming”. Uniqlo confirmed the partnership on Twitter. “UNIQLO is honoured to welcome Roger Federer as our new Global Brand Ambassador!” Uniqlo’s current athlete lineup includes Japanese tennis player Kei Nishikori and Australian golfer Adam Scott. In a statement, a spokesperson for Nike said they “do not comment on athlete contracts”. “However, we are thankful and proud to have been a part of Roger’s incredible journey and wish him the best in the future.” Nike still retains ownership of Federer’s monogrammed RF line. ESPN reported Federer’s earnings on-court are around $116m, making this new deal more than double his current tennis paycheck. The sports news website also said Nike had been given the chance to match the new contract but declined. But as the Japanese company does not make tennis shoes, it appears likely he will continue to wear his Nike trainers.