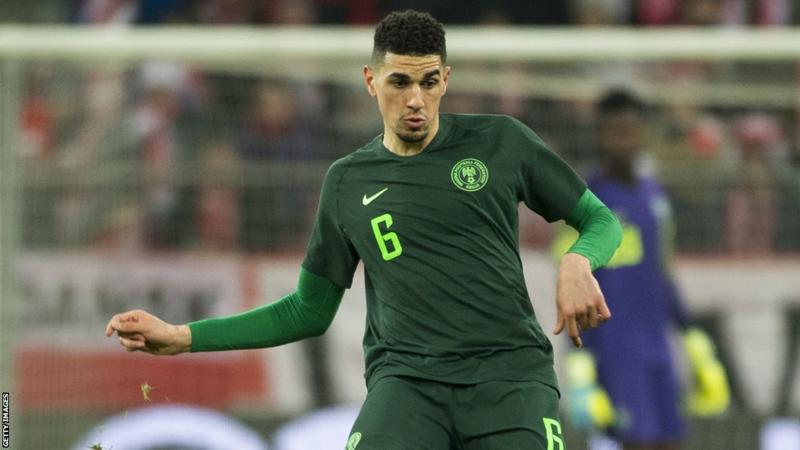 Leon Balogun has called on his Nigeria team-mates to learn football’s darker arts following their World Cup exit. The Super Eagles exited the tournament last week when losing to Argentina, who themselves crashed out on Saturday. “It’s always important when you play internationals to be a bit dirty,” the defender, 30, told BBC Sport. “That’s what Argentina has, definitely, and you also need to be cold-blooded – that’s probably the most important (lesson from this World Cup).” Despite winning just 22 caps, Balogun is one of the more experienced figures in a Nigeria squad that was the youngest of all the teams in Russia, with an average of 25.

The Super Eagles finished third in Group D after defeats by Croatia and Argentina either side of a 2-0 win over Iceland. The victory kept them in contention until just four minutes from the end of their campaign, when Marcos Rojo’s late strike sunk Nigeria and ended a World Cup that had promised more. “It will be very important to keep going the way we have started,” the new Brighton and Hove Albion signing added. “We have experienced players, young players, talented players – and there are even more players that are not in the team yet – and we have to keep developing them and investing in their football education. “We just have to keep working and keep our focus on advancing year after year and then in the next four years we will have a good team – maybe an even better one.” Balogun’s central defensive partner William Troost-Ekong also hopes the experience gained by the squad can lead to a brighter future for the Super Eagles. He also wonders whether a silver lining can come from the dressing room atmosphere following the bitter defeat to the South Americans in St Petersburg. “Everyone was just trying to deal with the loss and move on, so it was a quiet dressing room but definitely one that learnt a lot and hopefully formed some players,” he told BBC Sport. Prior to these finals, only five members of the current Nigeria squad had ever played in the World Cup before – with John Obi Mikel, Victor Moses and Ahmed Musa all seeing action in Russia while Elderson Echiejile and Oganyi Onazi were unused. Now, 13 more have experienced World Cup football. “This is what you need as a team,” Troost-Ekong, 24, told BBC Sport. “When you talk about that Argentinian team, that’s a team that has experienced all levels, Croatia are the same while Iceland have played the Euros together. “You need a tournament like this just to learn what it is like to play at this level, under this pressure, in front of the whole world. “Hopefully by the next time we get to a World Cup, and if we can be part of that with all the players (who played in Russia), it will be nothing new to us and it might be easier for us to perform at a higher level.” Troost-Ekong also highlighted the team spirit within Nigeria, whose squads in the past have often been accused of being more about individuals than togetherness. “All of us are really down to earth and most of us are quite young,” he said. “I think everyone has got great harmony, everyone wants to work for each other and if we can keep this up then it is definitely promising for the future.” Following their World Cup exit, Nigeria coach Gernot Rohr – who signed a two-year contract extension last year – also praised the mood within the camp. “I think the future is for Nigeria because the spirit is wonderful, big solidarity and you see in these difficult moments how great the spirit the team is,” he told BBC Sport. The German is keen to focus on two main areas following the Russia campaign – slow starts and a newfound belief. “What they learned is to be better in the beginning of the match,” he explained. “We reacted well in all three matches in the second half, so our start must be better. “Also – we should have no complex now. We have seen that we can win against good teams like Iceland. We had some mistakes of youthfulness, like conceding penalties, but all the time the team is in this collective spirit and I like it.”
Nigeria’s next competitive match comes in September when they play an Africa Cup of Nations qualifier against the Seychelles.