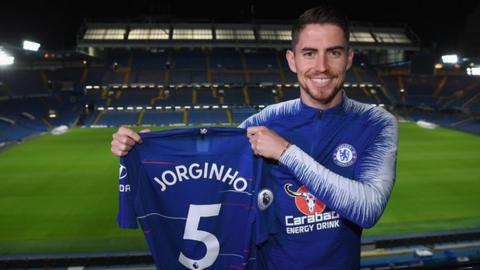 Chelsea have signed Italy international Jorginho from Napoli after Manchester City pulled out of a £50m deal. Jorginho, 26, has signed a five-year contract to join former Napoli boss Maurizio Sarri at Stamford Bridge. On Thursday, City were assured by Jorginho’s agent that the midfielder still wanted to join them, despite Napoli president Aurelio de Laurentiis saying the player favoured Chelsea.

“I am absolutely ecstatic to be here at Chelsea,” Jorginho said. “It is not easy to become part of such a big team so I am very, very happy. I am excited to play in such an intense league for a team that gives everything to play and win.” Brazil-born Jorginho had been at Napoli since 2014 and scored four goals in 36 appearances for the side last season as they finished second in Serie A. He scored a penalty in Napoli’s 4-2 Champions League defeat by Manchester City in November and also played for Italy in a 1-1 draw with England in March. Chelsea director Marina Granovskaia described him as “one of the most coveted midfielders in Europe”.