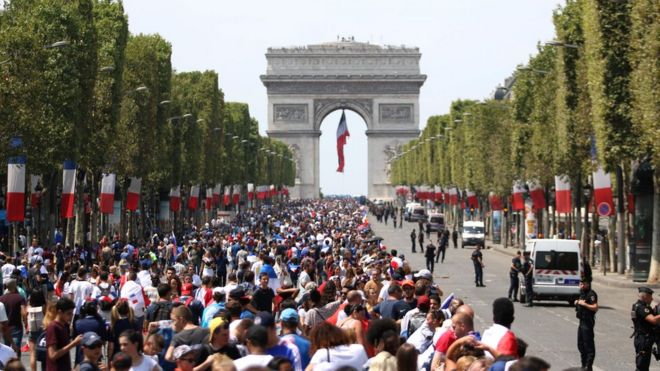 France’s victorious football World Cup team is to receive the country’s highest accolade, the Légion d’Honneur, the French presidency has announced. France defeated Croatia 4-2 in the final in Moscow on Sunday – the country’s second World Cup in 20 years. Crowds of fans gathered at Paris’ Charles de Gaulle airport on Monday to give the team a hero’s welcome. The players will be honoured with a parade on the Champs-Elysees and a presidential reception.

Fans partied across France overnight, but celebrations in some cities were marred by violence. Police fired tear gas as sporadic clashes broke out in Paris, Lyon, Strasbourg and Rouen. Dozens of youths broke into a shop on the Champs-Elysées and stole wine and champagne. But the national mood was one of joy, and Paris transport company RATP said it was celebrating the success of Les Bleus by renaming some stations after the victors.