It was the day ‘The Myth’ became reality. ‘CR7 Day’. The day Italian football’s most expensive signing – and one of the top four of all time – showed off his new colours. “Historic” was how one journalist described Cristiano Ronaldo’s arrival at Juventus on Monday. He was not wrong. About 200 journalists were at the Allianz Stadium for the unveiling of the five-time world footballer of the year. And, though his signing was announced last week, there was still a sense of disbelief he was a Juventus player; even the club described him as ‘The Myth’.

Torrential rain and thunderstorms brought a moody edge to the day as fans – many soaked to the skin – awaited the 33-year-old’s arrival, just as they had when he flew into Turin on Sunday. Compared to his presentation as a Real Madrid player in 2009 – when 80,000 supporters welcomed him onto the Bernabeu pitch – this was understated. There was, though, still time for his mother Dolores to be mobbed by the media. Then, with little fanfare, the £99.2m man took his seat, dressed in a navy blue suit embossed with the Juventus logo, and with a diamond studded earring shining in the flashes of the cameras. His first act? To take a picture of the assembled media. Ronaldo spoke as though he had a point to prove, and as if eager to show he still has plenty of motivation after winning his fifth Champions League title just two months ago. His previous employers were mentioned, of course, but he did not go into any great detail about the reasons he left, only saying he was “not sad”. Asked if Juve had been the only club to show interest, he laughed and said ‘si’ – the Italian for yes – and reiterated how flattered he was. This was a charm offensive.

The forward was keen to emphasise he had plenty left to give, saying players of his age “usually go to Qatar or China” but he was “different”. His dream of playing until he is 41 may yet come true. There were many questions about the Champions League. The competition seems almost an obsession for a team that have won their domestic league seven seasons in a row but have not conquered Europe for 22 years. The hope is Ronaldo is the man to get them over the line. Fans shouted “bring us the cup” at his medical earlier in the day and he responded by saying he hopes to be their “lucky star”. Notably, there was no discussion about the Fiat protests that had threatened to overshadow the day. “Everyone, everywhere, in all the bars, are talking about Ronaldo,” said Sabina Prestipino, a Turin-based journalist for Askanews. His price – that prompted the car workers to strike – “doesn’t matter” to fans, she said. And that was evident as the club shop, dominated by Ronaldo merchandise, teemed with fans. The club reportedly sold 520,000 shirts in the first day after announcing his signing, and gained four million followers on their social media channels. His ‘debut’ as a Juventus player lasted just under half an hour, and he signed off with a simple “ciao”. ‘The Myth’. A reality. 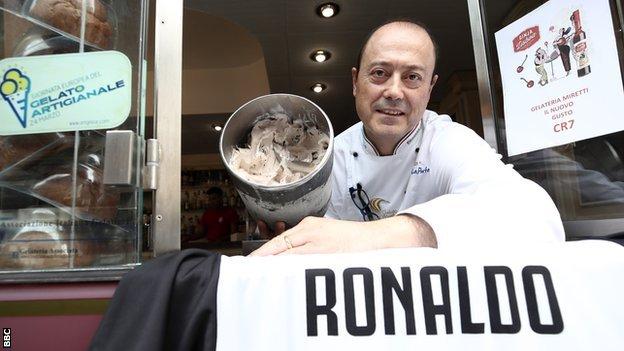 Miretti’s ice-cream shop in downtown Turin is selling a new ice cream to celebrate Ronaldo’s arrival – CR7 is made with a Portuguese sour cherry liqueur and chocolate flakes.