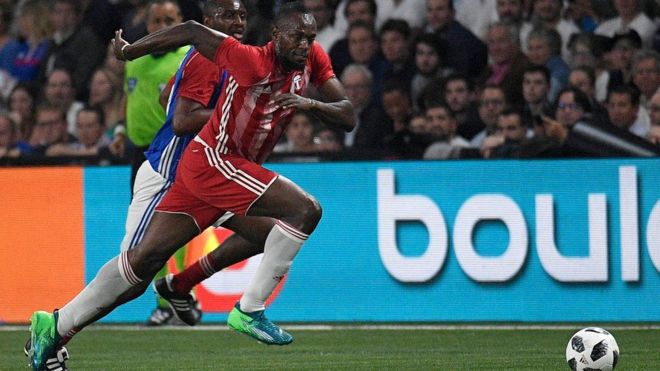 Eight-time Olympic champion Usain Bolt is in talks for a trial to play football in Australia, his agent says. The Jamaican former sprinter, 31, is negotiating a six-week stint with the Central Coast Mariners, a team in the country’s A-League competition. Club officials said “if all goes well”, Bolt could be signed for a season. His agent, Tony Rallis, said the trial had been agreed “in principle”. Bolt has previously trained with clubs in Germany, Norway and South Africa. The 100m and 200m world record holder, who retired from athletics last year, has previously spoken about his interest in becoming a professional footballer.

Bolt is a fan of Manchester United and one of its former assistant managers, Mike Phelan, is now at the Mariners. Mariners chief executive Shaun Mielekamp said the club had spent four months pursuing Bolt, and that progress on the deal was “going really well”. Mr Rallis said negotiations continued over Bolt’s pay. News Corp Australia reported that a “multi-million dollar” deal had been proposed. “The owner of Central Coast Mariners has put his hand deep in his pocket and guaranteed 70% of the salary,” Mr Rallis told local Sky Sports Radio. A Football Federal Australia spokesman told the BBC that it would not assist in funding Bolt’s trial. Mr Mielekamp said the club was optimistic that the trial could be extended. “If all goes well, who knows? He may be lighting up the A-League this season,” he told the local Seven Network on Tuesday. Mr Mielekamp said the club had received positive reports of Bolt’s performance when he trained with German club Borussia Dortmund and Norwegian side Stromsgodset. “The most important thing is we wait to find out and see how good a footballer he is first,” Mr Mielekamp said.
“Time will tell at what level he is at and it it fits the A-League.”