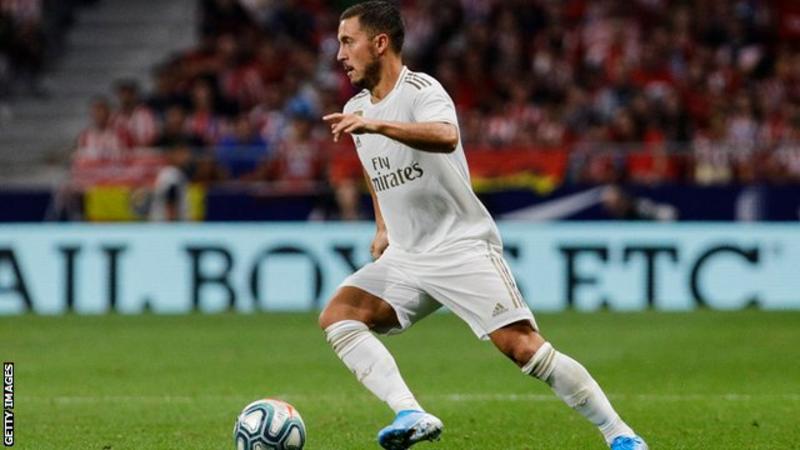 Eden Hazard says he does not feel like a ‘Galactico’ yet following a summer move from Chelsea which could exceed £150m in value. The Real Madrid forward, 28, has started three games in La Liga but is yet to record a goal or an assist. ‘Galactico’ is a term given to big-money, world-class signings by Real Madrid.

The Belgian has inherited all-time top scorer Cristiano Ronaldo’s number seven shirt and is widely regarded as his replacement for the 2019-20 season. “I’m not a Galactico yet. I have to show that I can be one,” said Hazard. “We all know the history of the number seven shirt at this club and I want to show I can be the best in the world. I want to give my all, not just in matches but in training too.” Hazard, who cost an initial £89m, could start Real Madrid’s Champions League group-stage clash with Club Bruges on Tuesday having played 70 minutes in their 3-0 defeat by Paris St-Germain. “I can do better, I’m critical of myself as well, but working every day we will change things,” said Hazard. “Not everything is perfect but we’re first in La Liga, we lost in Paris, maybe I was set back because of the injury but now I’m at 100% and hope to give my all in the coming games.” Hazard’s debut for the club was delayed after he picked up a thigh injury the day before the start of the season but the ex-Chelsea star says he “just needs to score goals” now. “When I start to score and get some good performances, everything will be easier. I’m missing a goal or assist to start to turn things around,” he added. Manager Zinedine Zidane backed Hazard to improve, saying: “I know he will triumph here but the important thing is to be calm and back him. I know how it works, I was worse when I arrived in Italy. There, I took three months [to hit form], at Madrid a bit less.”