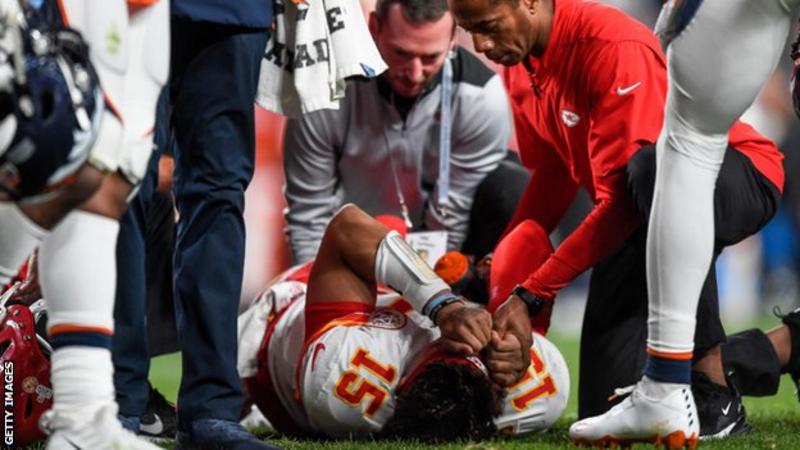 Kansas City Chiefs quarterback Patrick Mahomes could face a lengthy spell on the sidelines after dislocating his kneecap during his side’s 30-6 win over the Denver Broncos on Thursday. Mahomes, last season’s NFL MVP, went down in agony during an offensive pile-on in the second quarter and faces “at least” three weeks out.

The 24-year-old will undergo a scan to determine the extent of the injury. After the game, Mahomes tweeted: “Everything looking good so far.” Chiefs coach Andy Reid said he “didn’t know how serious the injury was”. “We’re good with whatever direction this thing goes,” he added. So far in 2019, Mahomes has carried on his good form from his record-breaking 2018 season despite being hampered by a sprained ankle he suffered against the Jacksonville Jaguars in the opening game. Mahomes, who led his side to their first AFC Championship game since 1993 last season, has thrown 15 touchdowns and just one interception this season. The Chiefs, who brought in veteran Matt Moore, 35, to replace Mahomes, now have a nine-day break until they host the Green Bay Packers on 27 October.