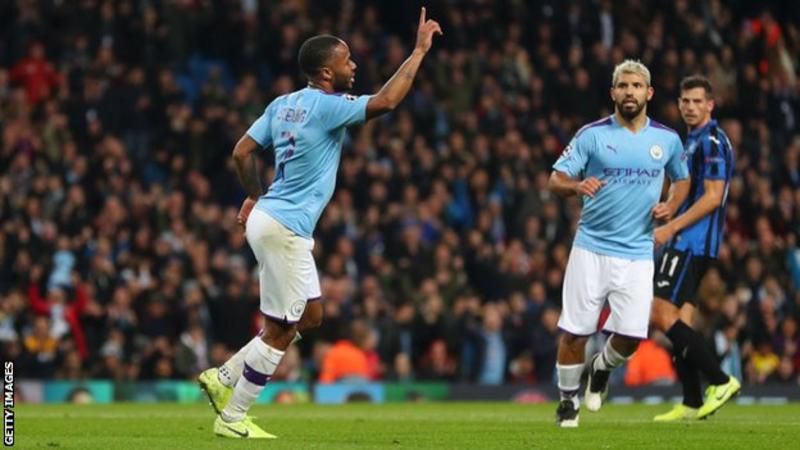 Pep Guardiola hailed Raheem Sterling as an extraordinary talent after his 11-minute second-half hat-trick helped Manchester City demolish Atalanta and maintain their 100% start in Champions League Group C. Sterling is City’s leading scorer with 12 goals in 13 games in all competitions this season and this latest ruthless display demonstrated again what a potent finisher he has become.

Guardiola feels there is even more to his game than just his goalscoring however, explaining afterwards: “His physicality is incredible. He is strong – the day after the game, he could play another game – his regeneration is incredible. “He can play both sides and he is fast so, defensively, he helps us a lot. He is an extraordinary, extraordinary player.” Sterling’s treble, which followed a first-half Sergio Aguero double, turned this game into another emphatic statement of City’s attacking power but it was a far from perfect evening for Guardiola. Rodri limped off with a hamstring injury before half-time and Phil Foden was sent off for the first time in his career for two late bookings. There was another reminder of City’s current defensive vulnerability too, when a Ruslan Malinovskyi penalty gave Atalanta a surprise lead after Fernandinho clumsily fouled Josip Ilicic. City, who began with an unfamiliar three-man defence, had shown some early uncertainty at the back and took time to get into their stride going forward. But Aguero quickly levelled from close range when he ran on to Sterling’s in-swinging cross and the Argentine fired City ahead from the spot before half-time after Sterling was fouled by Andrea Masiello. Sterling took over goalscoring duties after the break, firstly when he rounded off a fine move involving Riyad Mahrez, Kevin de Bruyne and Foden. By now Atalanta’s defence had completely crumbled and Sterling soon took full advantage, running on to an Ilkay Gundogan pass and cutting inside past Rafael Toloi before finding the net. Five minutes later Sterling made it 5-1 when he ran on to a Mahrez cross, and he should have added to his tally before the end when he fired wide after running clear. Foden, making only his second start of the season, saw red eight minutes from time after being booked for dragging back Marten de Roon as he shaped to shoot. The 19-year-old’s first yellow card had come six minutes earlier when he tangled with Malinovskyi in midfield, and appeared harsh. It remains to be seen how serious Rodri’s injury is, but Guardiola showed his frustration as John Stones prepared to replace him, slamming the back of one of the seats in his dugout. He did have some good news, however. Shakhtar Donetsk’s draw with Dinamo Zagreb earlier on Tuesday means a win in Italy when these two sides meet again on 6 November will seal City’s progress to the last 16 for a seventh successive year.