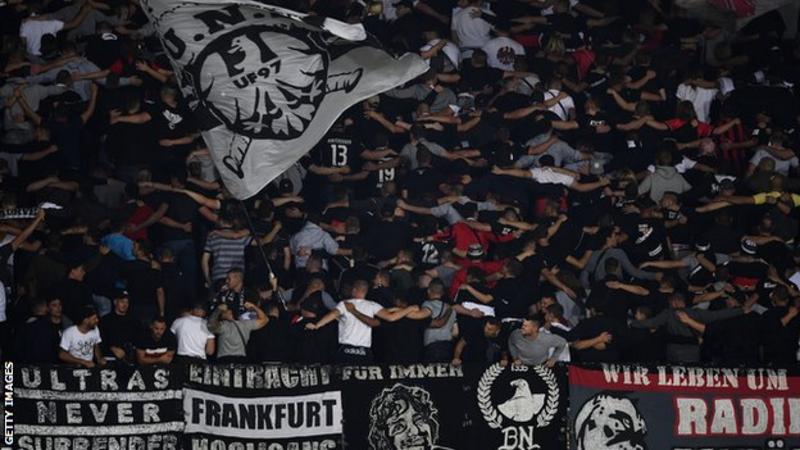 Eintracht Frankfurt fans have been banned from entering the Belgium city of Liege for Thursday’s Europa League group game against Standard Liege. UEFA banned Eintracht from selling tickets to its fans for the game, after crowd trouble in their 1-0 away win against Vitoria Guimaraes on 3 October.

The game is at 9:55 PST, but fans are banned from “the city territory” until Friday at 12:00 local time. Eintracht board member Alex Hellmann said the ban was “highly questionable.” Liege mayor Willy Demeyer had made the decision prior to UEFA’s ruling, which allowed Eintracht fans to come to Liege as long as they were travelling by car, had a valid ticket for the match and were going directly to the stadium. But UEFA then banned the selling of tickets to its away supporters for Thursday’s game and their match at Arsenal on 28 November. “The imposition of blanket and indefinite residence bans on entire cities for the mere reason of a football game without a specific threat is highly questionable in terms of law and completely incompatible with our view of a common understanding of European law,” Hellmann said in a statement. “In the short term, there is no legal action against this measure, so in consultation with our Belgian legal experts, it remains only to advise all supporters to comply with the injunction. “Anyone who visits the game or the city is in danger of being rejected and of having to go home.”