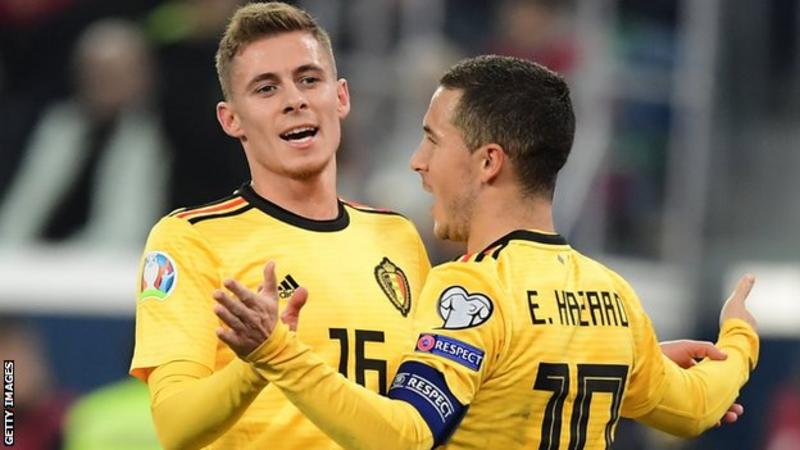 Eden Hazard scored twice as Belgium continued their perfect record in Euro 2020 qualifying with a thumping win over Russia. The Red Devils, who had already qualified, were three goals up by half-time through Eden Hazard’s double and a strike by his brother Thorgan.

Romelu Lukaku then added a fourth before Georgi Dzhikiya netted a late consolation for the hosts. Belgium will play their final Group I qualifier at home to Cyprus on Tuesday. Russia, who had also already booked their place at the finals, were blown away in the first half following a scintillating attacking display from Roberto Martinez’s side. The away side took the lead midway through the first half when Thorgan Hazard picked up his brother’s pass, cut inside and fired into the top corner. Real Madrid forward Eden Hazard then fired home Lukaku’s knock-down to double their lead before slotting home to make it 3-0 on 40 minutes. Russia did improve after the break, but their shaky backline was unable to stop Lukaku scoring his 52nd international goal when he drove infield and fired past Guilherme Marinato with 18 minutes left. However, there was something to celebrate for the home crowd when Dzhikiya poked in a rebound late on. Russia will close their Euro 2020 qualifying campaign in San Marino on Tuesday.