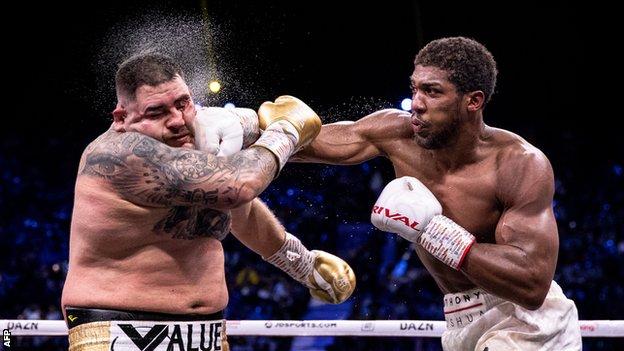 Andy Ruiz Jr “brought disgrace to himself” and boxing by being in “no fit state” to fight in his loss to Anthony Joshua, said promoter Frank Warren. Ruiz Jr, 30, weighed 20st 3lb for the fight in Saudi Arabia, more than three stone heavier than Joshua, who gained a wide points win to regain the IBF, WBA and WBO heavyweight titles.

“This was ridiculous. When eyebrows were being raised at the weigh-in he literally was the elephant in the room,” said Warren, who promotes Tyson Fury but was not involved in this bout. “Just because you’re a heavyweight it shouldn’t mean you don’t have an obligation to display a degree of athletic intention. “Ruiz Jr brought disgrace to himself and the sport by failing to prepare to any sort of level. Joshua must’ve wondered which chin he was supposed to aim for.” The Mexican-American was a full stone heavier than he had been in his first fight against Britain’s Joshua in June, when Ruiz Jr caused an upset with a seventh-round stoppage victory. However, after their second bout, he said “three months of partying” had left him in poor condition and that he “should’ve trained harder”, “was overweight” and “didn’t move how I wanted to”. Warren added: “What we ended up with was a fella who scoffed himself out of being world champion and a spectacle that suffered as a result. “It’s a bit late after the event to say you partied too much and regret carrying so much weight. “If he turned up like that for a non-title fight, the promoters and TV executives would be rightly hacked off over a fighter coming in so out of condition. “Spare a thought for those punters who had a punt on the champion, who had every right to believe he had put the graft in. “Professional athletes have a responsibility to ensure a level playing field on behalf of those who pay for the privilege of watching.” “I saw Ruiz saying he had achieved his dream. Well, if his dream was to win the titles then stuff himself stupid and lose them at the first time of asking, then his dream has become a reality. “King of the heavyweight division to Burger King in the space of six months.”