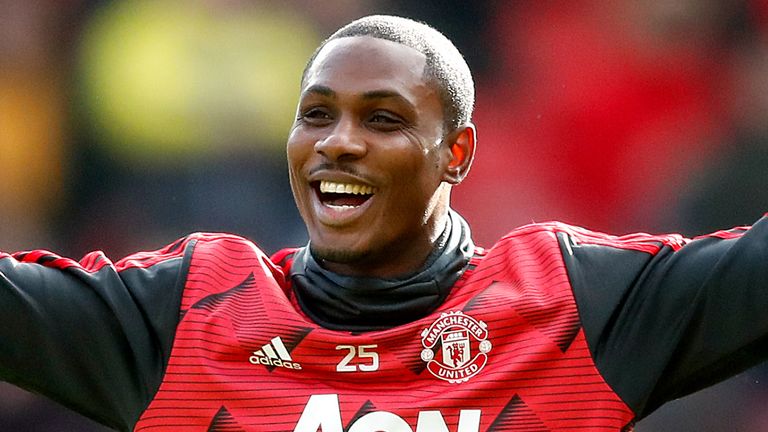 Odion Ighalo has vowed to do whatever he can to take Manchester United “higher and higher” after his loan from Shanghai Shenhua was extended. The Nigerian striker is set to stay at Old Trafford until January 31, 2021 after United struck a new deal with his parent club in China. Ighalo initially joined United in a Deadline Day move in January and scored four times in eight appearances in all competitions prior to the suspension of the Premier League.

“I’m really happy,” Ighalo said. “It’s a dream for me to be here. I’m buzzing and ready to go. Since the first day I arrived, I made it clear that I wanted whatever it takes to continue that work. “Like I’ve said, since I was young, I’ve been supporting this club and playing for it is a dream. Now I’ve extended my loan, it makes it more even clear and I’m committed as I know, in my head, I’m here until January ending. “I just want to work hard and enjoy it, support the team and do whatever I can to make us go higher and higher.” Shenhua’s original stance was that they would only agree to extend Ighalo’s loan if an obligation to buy was incorporated into the deal, with the former Watford striker likely to cost upwards of £20m. However, with border restrictions potentially preventing Ighalo from returning to China in time for the new season, the club softened their stance and allowed him to extend his stay in the Premier League. Ighalo revealed that the United squad are getting closer to match fitness ahead of the June 17 restart, and also admitted that training during the lockdown has been “strange” for the players. “I’m getting better and better every day,” he told the club’s website. “We have been training together the past two weeks now, so it’s getting close to the game. The sharpness is coming, the fitness is coming and everything is going well. “It’s been strange, you know, because you have to stay two metres apart to talk to your team-mates. Sometimes, you need to get close to give them some signs but now it’s two metres and it’s kind of strange. “But this is what we have to do for us to be safe and for the game to go on. We are ready to do it and we’re happy to do it. Everybody is looking good. Running, working hard and playing football. Little two-a-sides and doing some ball work. “Everyone is getting better and better. Everyone is back, even Paul is back training normally and Rashy is back training as normal. Everyone is training normally and training full and all that, so the squad is full and everyone is ready, I think. “I can’t wait for the league to start again. I’m really looking forward to it. We’re working hard and I believe we’re going to do great.”