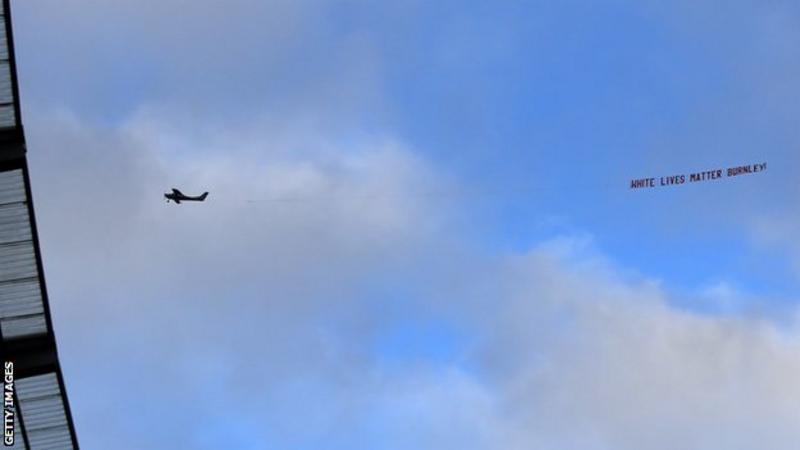 Burnley are “ashamed and embarrassed” by a banner reading ‘White Lives Matter Burnley’ that was towed by an aeroplane over Etihad Stadium during Monday’s match against Manchester City. The aircraft circled over the stadium just after kick-off in City’s 5-0 win. Burnley and City players and staff had taken a knee in support of the Black Lives Matter movement moments earlier. “Fans like that don’t deserve to be around football,” Clarets skipper Ben Mee said.

Defender Mee added: “We’re ashamed, we’re embarrassed. “It’s a minority of our supporters – I know I speak for a massive part of our support who distance ourselves from anything like that. “It definitely had a massive impact on us to see that in the sky. “We are embarrassed that our name was in it, that they tried to attach it to our club – it doesn’t belong anywhere near our club.” In a statement, Burnley said that the banner “in no way represents” what the club stands for and that they will “work fully with the authorities to identify those responsible and take appropriate action”. “Burnley strongly condemns the actions of those responsible for the aircraft and offensive banner,” the statement added. “We wish to make it clear that those responsible are not welcome at Turf Moor. “We apologise unreservedly to the Premier League, to Manchester City and to all those helping to promote Black Lives Matter. “The club has a proud record of working with all genders, religions and faiths through its award-winning community scheme, and stands against racism of any kind. “We are fully behind the Premier League’s Black Lives Matter initiative and, in line with all other Premier League games undertaken since Project Restart, our players and football staff willingly took the knee at kick-off at Manchester City.” Both Burnley and City were wearing shirts with the players’ names replaced with ‘Black Lives Matter’. Since the Premier League resumed on 17 June after a 100-day hiatus because of the coronavirus pandemic, players and officials have been showing their support for the movement for racial equality following the death of George Floyd in the United States last month. Floyd, a 46-year-old unarmed black man, died as a white police officer held a knee on his neck for nearly nine minutes. His death sparked protests around the world. Former Manchester City defender Micah Richards said seeing the banner was “disheartening”. “After how far we’ve come in these last couple of weeks, it really does hurt me,” he said. “I agree everyone should have free speech but when it looked like everything was on the up there’s a small fraction who want to ruin it.” City and England forward Raheem Sterling said it was a “massive step” that players took a knee in support of Black Lives Matter on the opening night of the top-flight’s return. Asked about the banner, City boss Pep Guardiola said society could not overturn 400 years of racial injustice in one week but added “we are going to change the situation”. “We need time, the racism is still there. We have to fight every day and condemn the bad things,” he said.