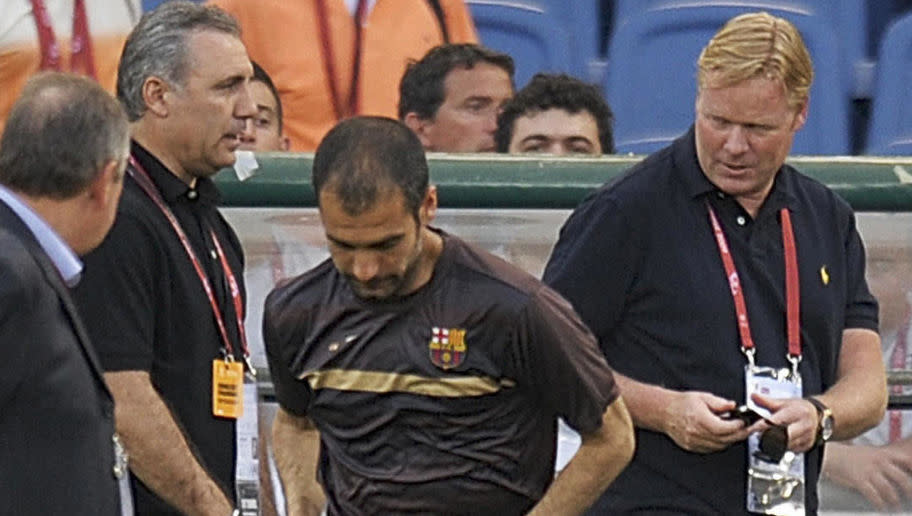 Everton boss Ronald Koeman has spoken of the time he spent with Pep Guardiola when the two were at Barcelona during their playing days, saying how he taught the then young Spaniard everything he knows. Speaking to the Mirror, Koeman recalled his time with Guardiola and paid tribute to the Manchester City boss’ eagerness to learn and develop in his playing days. The two men will face off as managers this weekend when Koeman’s Everton side travel to the Etihad Stadium to take on the league leaders. The two managers are believed to be good friends, having met at the Nou Camp over 20 years ago and Koeman revealed how their paths had first crossed. He said: “[Then-Barcelona boss Johan] Cruyff had seen this young player in the academy, seen him develop into a decent player in the reserves and he thought the time was there to draft him into the first-team squad.  According to Cruyff this boy was very bright, he had a quick brain and he needed a more experienced player to look after him. I told him it was fine (to have him as my new roommate).”

Guardiola has often praised the role that manager Johan Cruyff has played in his career but Koeman was quick to point out that the City boss had also  benefited from the time they spent together as players – again, the Everton boss insisted that he taught Guardiola everything he knows. “If the player was a talent and a good kid, I would help him. So he told me that from now on I was going to look after a boy called Pep. I then spent several years with Pep in hotel rooms before every game, every trip — in preseason, in Europe, you name it.” “Pep was a fantastic guy. He was eager to learn, he wanted to know everything. Pep wanted to know about the Dutch school of football. More than any other player he wanted to know about one-touch football, about positional play, one touch in small spaces. He loved the way Cruyff wanted to play with Barcelona.” Despite the success that Guardiola has enjoyed in his career, Koeman paid homage to his humbleness both as a person and as a player. He added: “But what struck me with Pep was that he was a very ordinary, down-to-earth guy. He never had arrogant streaks. He did not behave like a star because he was playing for Barcelona — he was driving a second-hand Golf when he came in the squad and after three years in the first team, he was still driving the same car.” Koeman later became Barcelona assistant coach whilst Guardiola still played for Barcelona.