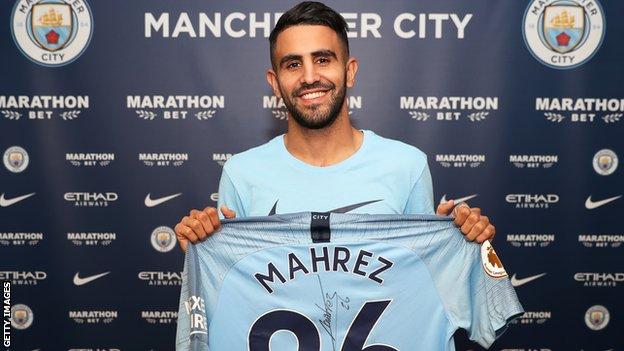 Manchester City have broken their club record to sign winger Riyad Mahrez from Leicester City for £60m. The 27-year-old has signed a five-year deal to become the Blues’ first recruit since they won the Premier League. They walked away from a potential deal for the Algerian in January after being put off by Leicester’s valuation. Mahrez said the club’s style of play is “perfect” for him and he wanted to be part of a club which is “redefining the English game”.

“Watching them from afar has been a pleasure,” said Mahrez. “Pep Guardiola is committed to playing attacking football, and City’s performances last season were outstanding. “I think we can be successful over the coming years and I believe my own game can develop under Pep’s management.”  Mahrez was named the PFA Players’ Player of the Year during Leicester’s surprise Premier League triumph in 2015-16, and leaves the club having scored 48 goals in 179 appearances. The Foxes said Mahrez had “played his way into the hearts” of supporters during four and a half years with the club. “His moments of magic will live long in the memory as the club and its fans continue to build a long-term legacy for the success delivered by the teams to which Riyad so memorably contributed,” a Leicester statement read. Mahrez handed in a transfer request in January but his move broke down with Manchester City not prepared to pay a £95m package demanded by Leicester. He stayed at the King Power Stadium – scoring 12 league goals in 36 games as the Foxes finished ninth in the Premier League – and admitted he had “regrets” over a dispute with the club which saw Professional Footballers’ Association offer to mediate. Manchester City were thought to have offered £50m at the time, but the final fee exceeds the £57m they paid Atletico Madrid for defender Aymeric Laporte in January. The deal represents a profit in excess of £59m for Leicester, who signed Mahrez from Le Havre for £400,000 in 2014.