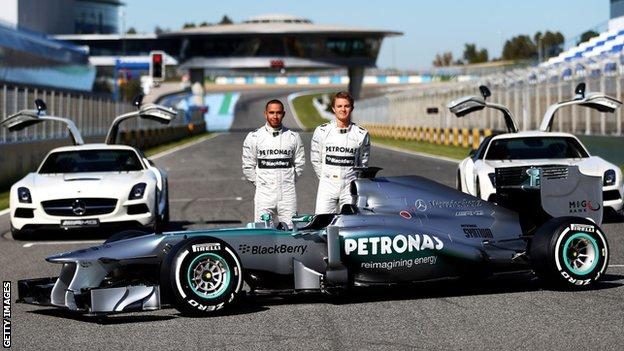 World champion Lewis Hamilton will race for Mercedes in Formula 1 for at least a further two seasons. The 33-year-old Briton has signed a new contract with the German manufacturer that lasts until the end of 2020. Hamilton will earn at least £30m a year, rising to a maximum of £40m, depending on bonuses. Hamilton said a new contract had been “a formality” since he sat down with Mercedes F1 boss Toto Wolff to begin discussions last winter. He said: “It’s good to put pen to paper, announce it and then get on with business as usual.

“I have been part of the Mercedes racing family for 20 years and I have never been happier inside a team than I am right now.
“We are on the same wavelength both on and off track – and I am looking forward to winning more in the future and shining even more light on the three-pointed star. I’m very confident that Mercedes is the right place to be over the coming years.” Mercedes have dominated F1 since the introduction of turbo hybrid engines in 2014, winning four consecutive drivers’ and constructors’ championship doubles. Hamilton has won three of those titles, with the fourth going to former team-mate Nico Rosberg, who retired after becoming champion in 2016. Hamilton’s first world title came with McLaren, using Mercedes engines, in 2008. He is eight points behind Ferrari’s Sebastian Vettel in this year’s championship before this weekend’s German Grand Prix, which marks the halfway point of the season. Hamilton added: “Although we have enjoyed so much success together since 2013, Mercedes is hungrier than ever.