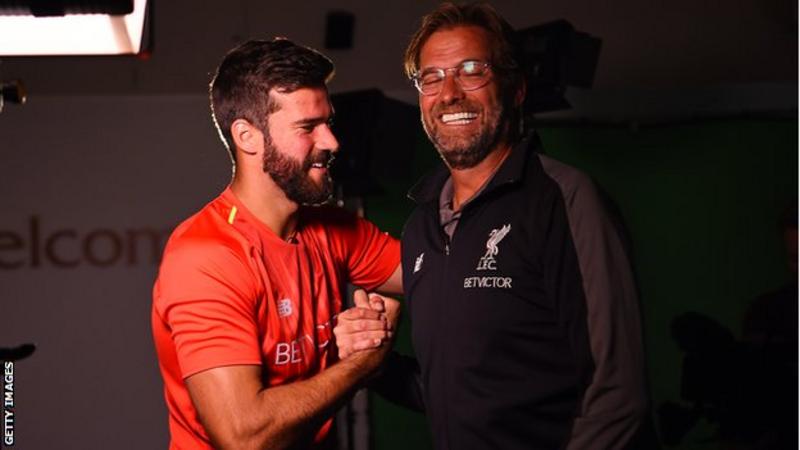 Liverpool have made Roma’s Alisson the world’s most expensive goalkeeper by signing him on a six-year deal. The Reds have not revealed how much they have paid for the Brazil number one but Roma said the deal is worth up to £66.8m (72.5m euros). “In terms of my life and my career, it’s a huge step for me being part of this club and this family,” said the 25-year-old. He has been at Roma for two years, playing 37 Serie A games in 2017-18.

Liverpool manager Jurgen Klopp said he has signed “a real personality”. “At one point in the last few weeks it came up, the opportunity to sign one of the world’s best goalkeepers,” he added. “The owners were quite excited, so we did it. “He has nothing to do with the price, we have nothing to do with the price. It’s the market, that’s how it is and we will not think a lot about it. “He needs to adapt to the English Premier League. The league is different, the refs are different, the goalkeeper’s life is different in the Premier League. “We got him here because of his existing strengths, which is in all goalkeeper departments the highest level.” Alisson said the move was a “dream come true” and revealed Liverpool forward Mohamed Salah, who he used to play with at Roma, had sent him a message before he completed the move to Anfield. “Yesterday, he sent me a message saying: ‘Hey, what are you waiting for?’ As the negotiations were at an advanced stage, I replied to him straight away saying: ‘Calm down, I’m on my way!’ “I’m really happy to have the opportunity to play alongside him again. As well as being a great player, he is a huge character and a great person – which is the most important thing.”