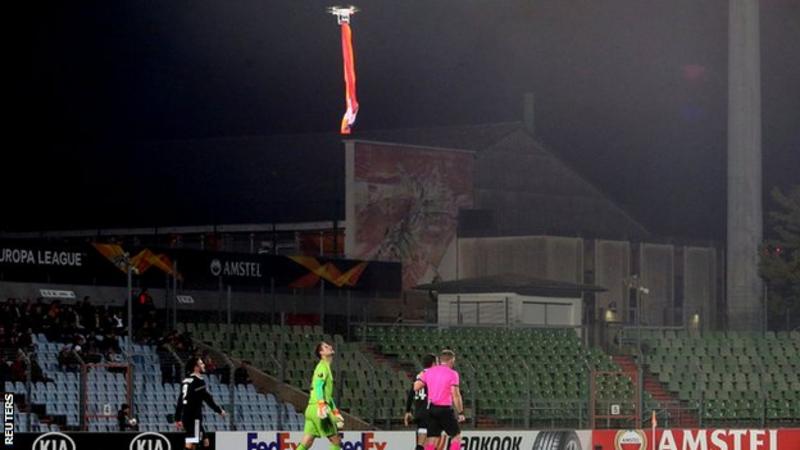 The Europa League game between F91 Dudelange and FK Qarabag was temporarily halted when a drone was flown over the ground. A delay of more than 15 minutes followed the appearance of the drone, which was carrying a flag.

Players from Luxembourgish side Dudelange and Qarabag, of Azerbaijan, tried to bring the drone down by kicking the ball at it. The incident happened in the first half of the match, which Qarabag won 4-1. The flag appeared to be that of the disputed region of Nagorno-Karabakh, a landlocked separatist region within Azerbaijan. Although the area is internationally recognised as part of Azerbaijan, it is in practice an independently-run, ethnically-Armenian enclave which came into being after a conflict between the two countries starting in 1988. Originally, FK Qarabag was a team from the city of Agdam in Nagorno-Karabakh, but it moved to Baku in 1993. Both countries signed a ceasefire in 1994, although the war has never technically ended. Dozens were killed when clashes broke out in the region in 2016. Armenian and Arsenal midfielder Henrikh Mkhitaryan refused to play in the Europa League final in Baku last May because he feared for his safety in Azerbaijan’s capital. In 2014 a drone trailing an Albanian flag and a map showing Albanian nationalist claims on neighbouring states was flown over the pitch during a Euro 2016 qualifying match between Serbia and Albania. The incident sparked a brawl and the match had to be abandoned.