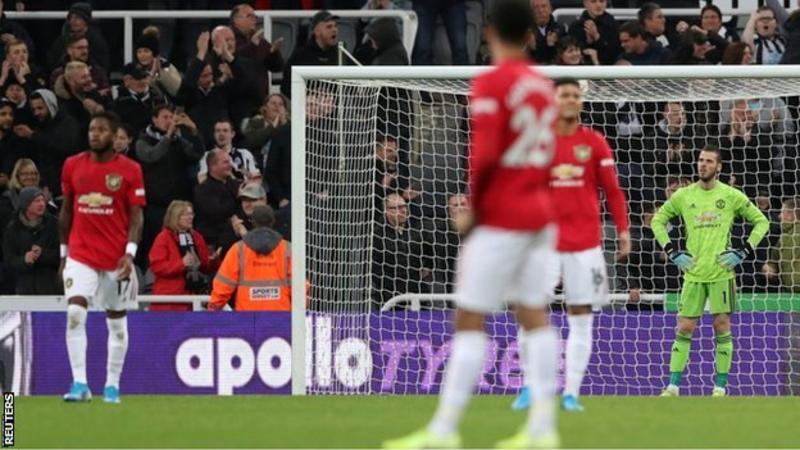 Manchester United goalkeeper David de Gea said the team’s performances this season have been “unacceptable” and this is the “most difficult” period he has experienced since joining the club. The Red Devils lost 1-0 at Newcastle on Sunday to extend their worst start to a league season for 30 years.

The club are now 12th in the Premier League, two points above the drop zone. “The game isn’t acceptable,” said De Gea. “The whole season [so far] isn’t acceptable for us.” Speaking to Sky Sports, De Gea added: “We didn’t create any proper chances. We have a lot to improve. I don’t know what to say. We need to step up. “We have injuries but it’s not an excuse. We are Manchester United, we need to train hard to keep fighting and to get back to winning games.” For De Gea, it is the most difficult spell he has endured at Old Trafford since joining the club from Atletico Madrid in 2011. The Spaniard won the Premier League in Sir Alex Ferguson’s final season in 2012-13, but the club has struggled to launch a sustained title challenge since. He has also worked with four permanent managers and two caretakers during that time including Solskjaer, who was awarded the permanent role in March after a successful spell in temporary charge. When asked what the team needed to do to improve, De Gea said: “Everything. A lot of things to improve. “Keep trying, keep trying, keep fighting every day. It’s a hard moment for us but we are United and we need to keep fighting. “It’s probably the most difficult time since I’ve been here. I don’t know what is happening. We cannot score even one goal in two games. Sorry to the fans. We will keep fighting for sure. We will come back but at the moment we’re in a difficult situation. “We defend quite well. It’s true that they had good chances but come on, we conceded a goal from a corner. That cannot happen. It’s not acceptable. Not just this game, the whole season is not good.”