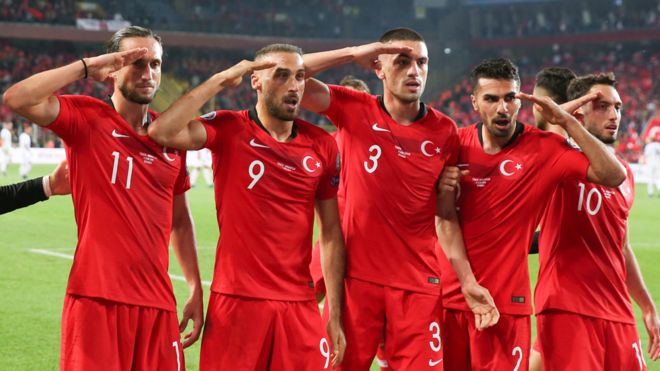 Europe’s football governing body UEFA says it will investigate a military salute given by Turkey footballers after Everton star Cenk Tosun scored a goal against Albania. Turkey’s 1-0 win in Istanbul came on Friday, amid Turkish army clashes with Kurdish fighters in northern Syria.

Tosun posted the salute photo on Instagram, with the message: “For our nation, especially for the ones who are risking their lives for our nation.” UEFA does not allow political gestures. The win keeps Turkey at the top of its group in the Euro 2020 qualifying matches. On Wednesday Turkey launched a major offensive in areas controlled by the Kurdish-led Syrian Democratic Forces (SDF). Dozens of civilians and fighters have been killed on both sides. On Instagram, the Turkish Football Federation also posted an image of the Turkey players and trainers saluting in the dressing room, along with the message: “At the end of the road lies the championship! After seven matches we continue our leadership in the Euro 2020 Qualifying Group H. We give this win to all our hero soldiers.” UEFA spokesman Philip Townsend told Italian news agency Ansa the Turkish salute “could seem like a provocation”. I can guarantee that we will examine this situation, let me check,” he said. Turkey’s military push is now overshadowing the Euro qualifying match between France and Turkey, set for Monday evening in Paris. French Foreign Minister Jean-Yves Le Drian had planned to go, but has now cancelled his attendance. And in a tweet, an MP for the centre-right UDI party, Jean-Christophe Lagarde, said: “How can one allow a football match to become a political petition in support of an army invading another country and massacring civilians who are our allies!?”