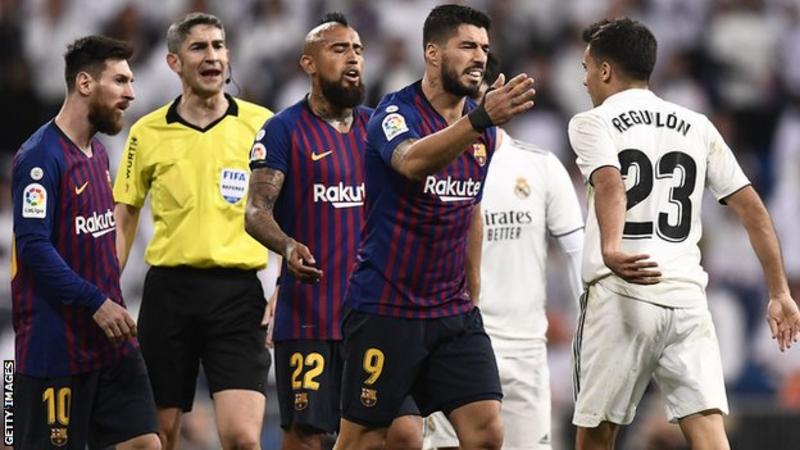 La Liga has asked for El Clasico on 26 October to be switched from Barcelona’s Nou Camp stadium to Real Madrid’s Bernabeu over fears of civil unrest. There have been days of protest in Barcelona after nine Catalan separatist leaders were jailed on Monday.

La Liga made the request to the Spanish Football Federation (RFEF), and both clubs will be asked for their opinion. It is understood that Barcelona will refuse the request as the club feel the switch is unnecessary. More protests are expected in the city on the day of the match and the RFEF says the move comes in “exceptional circumstances beyond our control”. The Federation’s competitions committee to make its decision in the next few days. Barcelona and Real Madrid were not involved in La Liga’s initial request and there has been no official response from either club. It means the fixture scheduled for March will now take place in Barcelona. The Catalan Football Federation suspended all matches in the region on Monday, although that ruling does not affect La Liga matches or the Spanish national team. Catalonia is a semi-autonomous region in north-east Spain and in a referendum on 1 October 2017, declared illegal by Spain’s Constitutional Court, about 90% of Catalan votes cast backed independence. Turnout was 43%. The nine separatists were convicted of sedition over their role in the referendum and handed jail sentences of between nine and 13 years by Spain’s Supreme Court. Following the sentencing, Barcelona said: “Prison is not the solution.” The Spanish champions added: “Now more than ever, the club asks all political leaders to lead a process of dialogue and negotiation to resolve this conflict, which should also allow for the release of convicted civic and political leaders. “FC Barcelona also expresses all its support and solidarity to the families of those who are deprived of their freedom.”