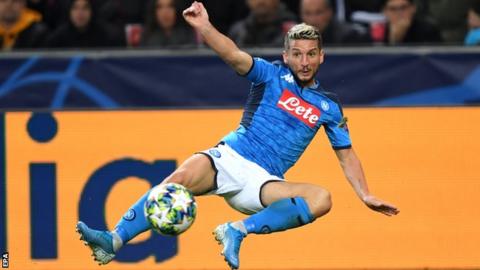 Dries Mertens overtook Diego Maradona as Napoli’s second highest all-time goalscorer as they beat Red Bull Salzburg 3-2 in the Champions League. The 32-year-old’s double saw him go one ahead of the Argentine on 116 goals, five behind Marek Hamsik.

Maradona was a hero at Napoli, helping them win their first league title in 1986-87. Mertens also set up Lorenzo Insigne’s winner to keep Napoli one point above Liverpool at the top of Group E. The Belgium forward ruined a record-breaking night for Salzburg’s teenage striker Erling Braut Haaland. The 19-year-old Norwegian scored twice to become the first player to score six times in their first three Champions League games. He also became the second teenager to score in his first three matches in the competition after Karim Benzema. Napoli, who have seven points from three games, could wrap up a last-16 spot if they beat Salzburg on 5 November.