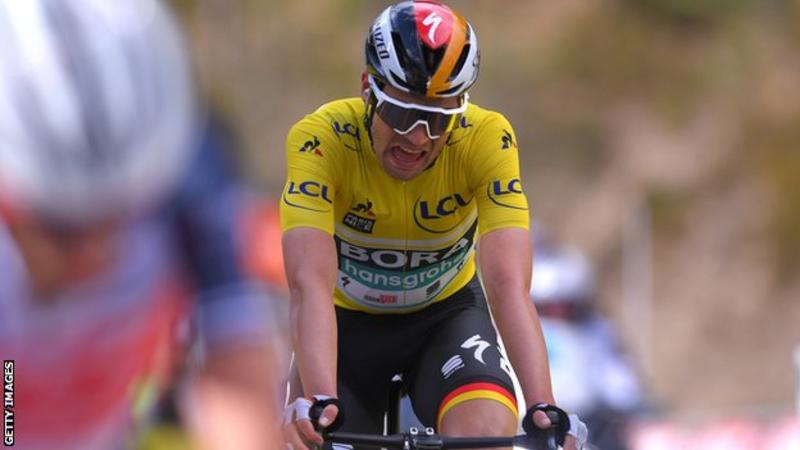 Germany’s Maximilian Schachmann held on to win Paris-Nice as the race finished a day early because of coronavirus. On Friday, organisers announced the cancellation of Sunday’s finale, a day after the French government banned gatherings of more than 100 people. So Saturday’s 166.5km route from Nice to the summit finish at Valdeblore la Colmiane was the final stage.

Danish world champion Mads Pedersen pulled out on Saturday morning after Denmark asked nationals to return home. Australian Richie Porte said before the final stage that the race had been “a funny one mentally” for riders. “I’ve got a pregnant wife at home, a baby, and no-one really knows whether we should be here or not,” he added. “It will be a nice race to get finished.” Colombia’s Nairo Quintana won the final stage, with Bora Hansgrohe rider Schachmann, 26, the overall winner. Schachmann had lost time on Friday’s sixth stage, but held on to finish 18 seconds ahead of Team Sunweb’s Tiesj Benoot in the general classification. Climbing specialist Sergio Higuita of Team EF Pro Cycling struggled to make up time on the final stage and finished third overall, 59 seconds behind. “The last three kilometres were hell, but now I’m in heaven. This is the greatest victory of my life,” said Schachmann. Elsewhere, the Tour of Flanders, due to take place in Belgium on 5 April, looks almost certain to be postponed after Belgian minister of sport Ben Weyts said it did not look “feasible” to run the race. The French ‘monument’ classic race Paris-Roubaix, set for April 12, is also likely to be called off after the French Cycling Federation cancelled all cycling events until further notice.