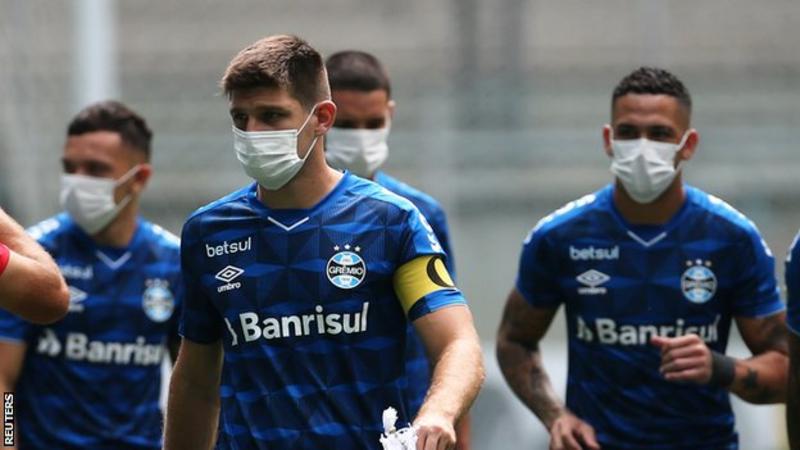 Players from Brazilian club Gremio took to the field wearing masks on Sunday in protest at having to play a football match as fears over coronavirus grow in the South American nation. The players, led by boss Renato Portaluppi, walked out of the tunnel and lined up before the game against Sao Luiz wearing the masks. “This protest by the players makes implicit our support for the championship to be halted – life must take precedence,” said Paulo Luz, Gremio’s director of football.

No spectators were allowed into the Gremio Arena for the Gaucho state championship match, which Gremio won 3-2, with the masks not worn during the game. After the game. Portaluppi said: “The whole world has stopped – shouldn’t Brazilian football stop as well? That’s our message and I hope they listen. We hope that good sense will prevail.” The protest comes as players and clubs across South America are starting to complain at decisions by footballing authorities to order games to be played, but behind closed doors. Flamengo coach Jorge Jesus appealed for football to be halted, saying players needed to be protected because “they are not super-human”. Later on Sunday, the Brazilian Football Confederation suspended all national competitions, but said it was up to local federations to decide whether to halt the state championships. In Argentina, River Plate refused to play their Superliga Cup tie against Atletico Tucuman on Saturday. The Buenos Aires club closed their stadium, leaving match officials and a delegation from Atletico outside the ground.