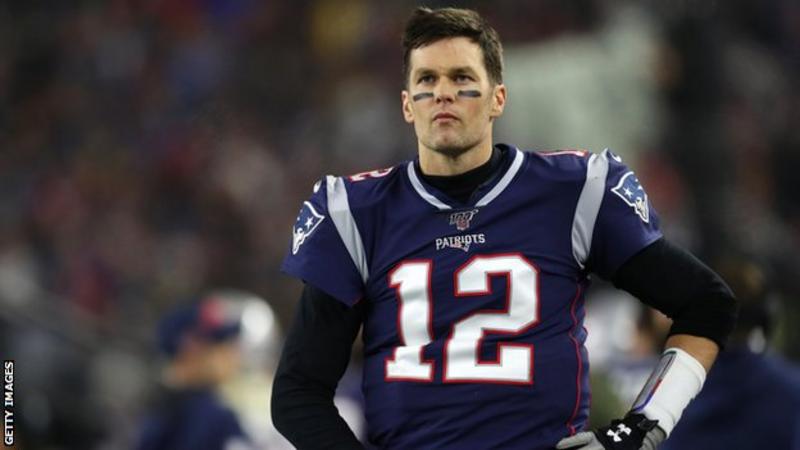 Quarterback Tom Brady backed New England Patriots chiefs after he was asked whether they could have done more to prevent the end of their 20-year relationship. The 42-year-old helped Patriots to six Super Bowls, but became a free agent in this off-season and signed for Tampa Bay Buccaneers last week. “No, I have a great deal of respect,” responded Brady. “I’m so grateful to Robert Kraft [owner] and coach [Bill] Belichick.”

He added: “I don’t want to get into any [details about] the process of the decision I was making at the time. “But there were a lot of things that were really intriguing to me about the [Tampa Bay] organisation – the players and the coaches and the willingness of everyone to try to accomplish what the goal of football is, which is to win.” Brady said he is counting on his experience to help him transition to a new way of playing at a franchise run by the Glazer family, who also own Manchester United. He said: “There are a lot of things I have got to get up to speed on – obviously, learning different terminology – and that’s a unique challenge that I haven’t faced, but it is one that I am looking forward to also. “I am not going to make a bunch of predictions to where I have been. I go in looking for an opportunity to learn from the new coaches and the new players that I will be playing with – and I’m going to give it everything I have got.” Because of coronavirus concerns it remains unclear as to when American athletes will be able to train together, with most sport in the country in lockdown. NFL spring workouts have also been affected. Brady added: “I don’t know how the next few months are going to go, in terms of access to the team facilities. “I am doing the best I can to have conversations with guys. Technology is an amazing thing and we are going to try to use that as best we can. “It is unfortunate what we are going through in our world. It presents different challenges for all of us. “So as soon as we have the opportunity to all be together in one place, we can really start working toward that, and that is what I am going to do.”