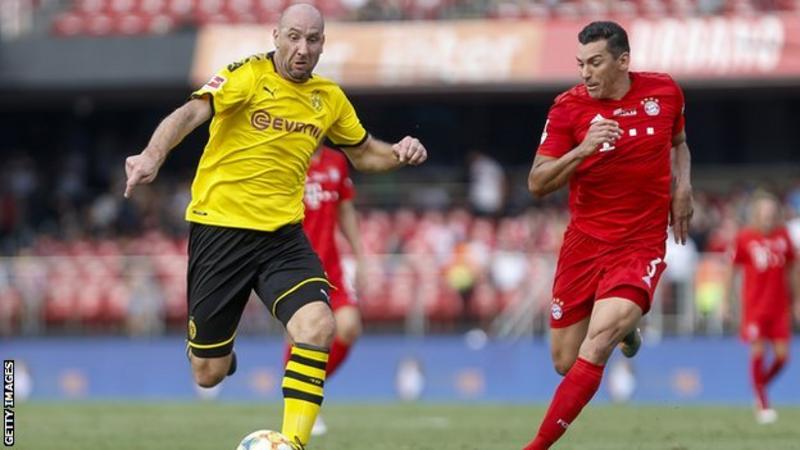 The four Bundesliga clubs in this season’s Champions League have pledged 20m euros to support fellow German teams during the coronavirus. Bayern Munich, Borussia Dortmund, RB Leipzig and Bayer Leverkusen will forego their share of the national media revenue and donate the remainder from their own funds. The German Football League (DFL) will decide how the money will be distributed.

“We want to send a signal of solidarity to all clubs in the Bundesliga and Bundesliga 2,” Bayern chief executive Karl-Heinz Rummenigge said. The last Bundesliga fixture was played on 11 March and football in Germany’s top divisions was suspended with immediate effect on 13 March because of Covid-19. Former West Germany striker Rummenigge added: “In these difficult times, it’s important that the stronger shoulders support the weaker shoulders. With this, we also want to show that football is standing together right now.” Dortmund chief executive officer Hans-Joachim Watzke said: “We have always said that we would show solidarity if clubs, through no fault of their own, should run into difficulties that they can no longer overcome themselves. “Borussia Dortmund is currently having a major impact on society through a wide range of initiatives. And naturally we are prepared to help out other professional football clubs if it is ultimately a matter of cushioning the financial effects of the pandemic.” Christian Seifert, a spokesman for the DFL executive committee said: “The initiative shows that solidarity is more than just lip service in the Bundesliga and Bundesliga 2.” Bayern Munich striker Robert Lewandowski and his wife Anna have contributed one million euros (£923,900) to fight the virus, team-mates Leon Goretzka and Joshua Kimmich set up a fund called We Kick Corona and contributed one million euros between them, while Manchester City’s German winger Leroy Sane has also made a considerable financial donation. On Wednesday, players and directors at Bayern Munich and Borussia Dortmund agreed to take temporary pay cuts.