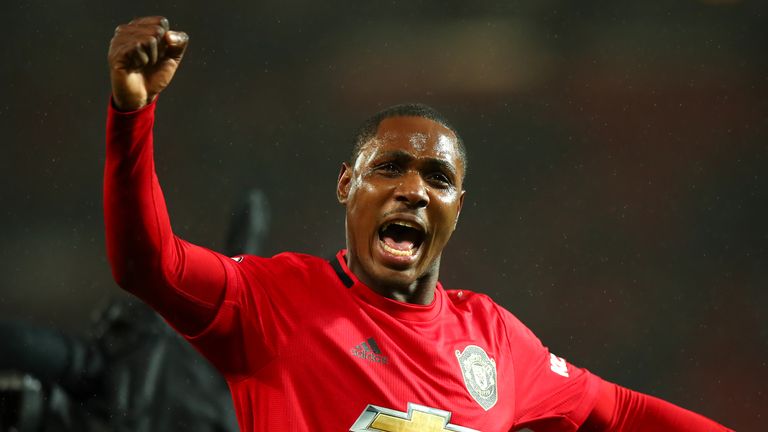 Manchester United loanee Odion Ighalo has been offered a two-year contract extension worth more than £400,000 per week by his parent club Shanghai Shenhua. The Chinese club want to reward the Nigerian striker for his good form at United, where has scored four goals in his first three starts. The 30-year-old’s loan in England expires on May 31 but it is likely to be extended until June 30 because of the coronavirus pandemic.

Ighalo’s current contract expires in December 2022 and Shanghai want to keep him until December 2024. The new deal would see Ighalo earn £400,000 a week before tax, which is said to have flattered the striker. His focus, though, is on United until his loan spell expires. He will wait to see if United offer him a permanent deal before making a final decision on his future. Ighalo has always said it has been a dream playing for United, the club he supported as a boy. Ighalo’s impact has been both instant and impressive. Before a ball had even been kicked, the 30-year-old’s infectious application drew admiration from his team-mates and manager, Ole Gunnar Solskjaer, who knew at the very least he’d made a valuable addition to his squad. “The best thing about him is his personality,” the United boss remarked. And when the time eventually came for Ighalo on the pitch, he proved he had the aptitude to match his first-class attitude. Just as he looked to have really settled into his groove, the coronavirus outbreak limited Ighalo to just eight United appearances, but in that handful of games he more than left his mark. Premier League minutes – and, for that matter, goals – have proven tough to come by for Ighalo, but the half-an-hour he has got under his belt has proven to be eventful. Having nearly marked his top-flight debut for United with a goal, seconds after coming on in their 2-0 victory at Chelsea on February 17, Ighalo’s superb hold-up play and back heel laid the foundation for the attack which led to Scott McTominay’s strike in the Manchester derby. But it is in the cup competitions where Ighalo has really come to the fore. The striker has scored four goals in three starts, the latest of which came in emphatic fashion as he rifled United into the lead against LASK in the last 16 of the Europa League, hours before football was suspended. It was a strike that left Solskjaer purring. All great strikers are judged first and foremost on their goal return, but Ighalo brings so much more to the table – Ighalo brings something different. In his 31 minutes of Premier League football for United, the Nigerian has not only demonstrated he knows his role in Solskjaer’s squad but shown how much he relishes it, offering a presence, a focal point up top that occupies opposition defenders and brings others into play. It’s something United have yearned for since Romelu Lukaku’s departure, and you could even argue has not been fully addressed since Zlatan Ibrahimovic’s time at Old Trafford. What’s more, Ighalo’s selfless leading of the line could crucially unshackle Anthony Martial and Marcus Rashford from duties at the spearhead of the attack the pair have seldom been able to fulfil with a level of consistency Solskjaer is searching for. In his short Premier League career with the club, Ighalo averages nine more touches in the opposition box across 90 minutes than United’s two main striking options, figures which of course are caveated by the fact he’s played a mere 30 top-flight minutes, but credible figures, nonetheless. While a lot of time was spent in January discussing improved recruitment and the drive to pinpoint players who could make a difference and raise the quality at Old Trafford, it has to be said the signings of Bruno Fernandes and Odion Ighalo have only served to underline a more positive trend that seems to be continuing. Of course, the circumstances of Ighalo’s arrival made him something of a gamble but it’s one that – after less than a month in the first-team picture – shows signs of paying off, especially when you consider the player would love to remain at United and the club is examining the options of possibly extending his stay.