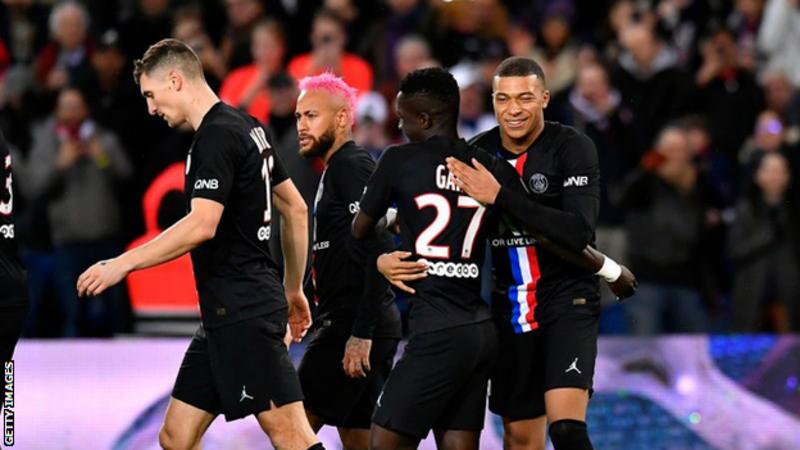 Paris St-Germain have been awarded the Ligue 1 title after it was announced the season would not resume because of the coronavirus pandemic. PSG were 12 points clear at the top of the table, with a game in hand, when French football was suspended indefinitely on 13 March. Earlier this week the French government cancelled the 2019-20 sporting season. The club said they wished to dedicate the title “to healthcare staff and all the everyday heroes on the front line”.

PSG chairman and CEO Nasser Al-Khelaifi added that French essential workers’ “commitment and self-sacrifice over many weeks have earned our deepest admiration”. He continued: “We understand, respect and support the decisions taken by the French Government to end the championship. Health, as the government has always said, must be everyone’s priority. “In these difficult times, I hope that this trophy will bring a little happiness and hope to all our supporters, and I am grateful to them for their unwavering support which helps drive Paris St-Germain forward.” Before the government’s intervention, French football’s governing body had been hoping to resume the season on 17 June. PSG have been awarded the title on a points-per-game basis, while Lorient have been crowned Ligue 2 champions on the same principle. They were just one point above Lens when the season was suspended and both teams will be promoted. Amiens and Toulouse will be relegated from Ligue 1. Lyon – who were fifth a week before the last match day, but finished seventh – said they might appeal against the verdict. Now set to miss out on a place in Europe next season, Lyon say they also “reserve the right to claim damages”, which the club say amount to “several tens of millions of euros”. “There might be appeals but our decisions are solid,” said Didier Quillot, the chief executive of the French League (LFP). Quillot added the LFP had until 25 May to tell UEFA which clubs will be qualified for European competitions. That is the same day by which European leagues have to tell European football’s governing body whether they want to complete or cancel their seasons.