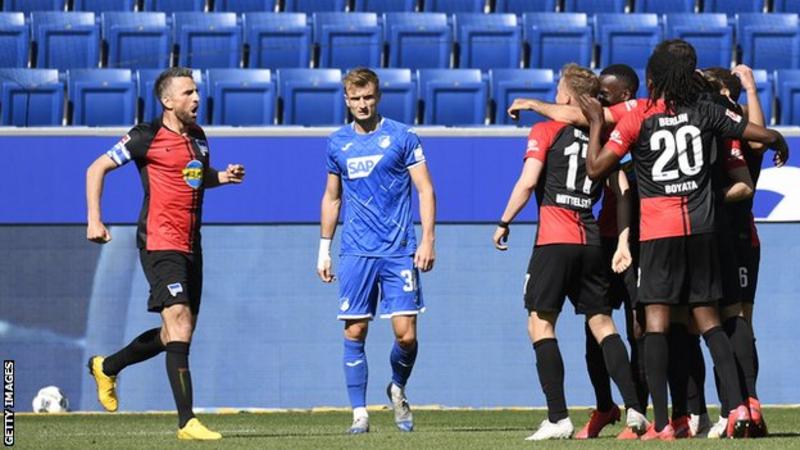 Bundesliga players will be reminded of the return-to-play guidelines before next weekend’s matches after Hertha Berlin’s players ignored them during Saturday’s 3-0 win at Hoffenheim. The DFL [German football league] has already said Hertha will not be punished for their celebrations. However, Bundesliga International chief executive Robert Klein says the guidelines need to be followed.

“[There are] clear guidelines. We need everyone to respect them,” he said. “In the hygiene concept, the guideline is to celebrate within social distancing rules. One can imagine at the height of a goal being scored that maybe, sometimes, the players get closer. “The clubs are working actively with the players. They speak to them every day to remind them of what needs to be done to ensure we earn the right to a second match-day and a third and to finish the season.” Klein regards the opening weekend of post-Covid-19 top-flight football in Germany as a success. Despite concerns, he has not been informed of any groups of fans gathering in significant numbers at stadiums or city centres to watch matches. “It was a big sense of relief,” he said. “The fans understand the times we are living in are unusual. Sometimes these requests are difficult for them but everything has gone smoothly.” Klein has not been informed of any positive Covid-19 tests around games and while the weekly meeting with clubs will go ahead as normal, he is not aware of any issue that would threaten the next round of matches and the midweek games after that, which include Borussia Dortmund’s encounter with Bayern Munich on Tuesday, 26 May. As none of the other major European leagues are due to restart until next month, Klein understands ‘the eyes of the world’ are on Germany. And early figures suggest there has been unprecedented global interest in the Bundesliga. A record six million viewers watched Sky Germany’s goals programme on Saturday, which was shown for free. The precise international audience numbers will not be known until later in the week but Klein noted ‘quite incredible’ interest, and that ‘Bundesliga’ was trending in South Africa, Colombia and Ghana, among others, on Saturday.