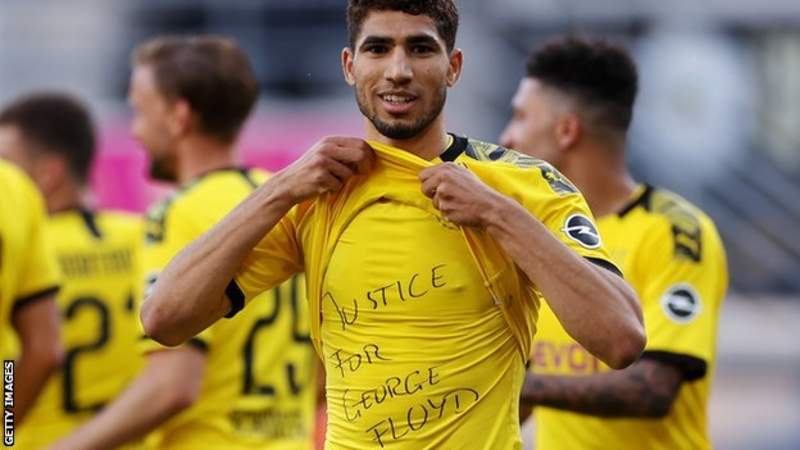 Achraf Hakimi is among several African sportsmen to show support for the late African-American George Floyd after the Morocco international scored in Borussia Dortmund’s 6-1 thrashing of Paderborn. The United States has seen a number of protests in major cities across the country since Floyd, an unarmed black man, died while being restrained by white Minneapolis police officer Derek Chauvin on 25 May.

Hakimi demonstrated his support on Sunday by crossing his fists in the air in a sign for justice after scoring in the 84th minute, while also lifting his jersey to reveal ‘Justice for George Floyd’ handwritten on his vest. The right-back, who is on loan at Dortmund from Real Madrid, also tweeted to say: ‘Together we will defeat racism! Justice!’ Union Berlin’s Nigerian forward Anthony Ujah also took to Twitter to speak on the issue, posting a picture of himself with his shirt bearing the words ‘can’t breathe’, ‘justice’ and ‘Eric Garner’, another black man who died at the hands of police back in 2014. Ujah tweeted a picture of a previous protest of his but with ‘George Floyd’ now edited into the shot. On Monday, Senegal’s Sadio Mane and Egyptian Mo Salah joined their Liverpool team-mates in sending a message of solidarity as the squad ‘took a knee’ around a centre circle during the Reds’ training session on Monday. Mane further posted the picture on Instagram with the caption: ‘Unity is strength. #Blacklivesmatter.’ Former San Francisco 49ers quarterback Colin Kaepernick first protested against racial injustice and police brutality by kneeling down during the United States national anthem in the summer of 2016. Since then, that gesture has become symbolic to the Black Lives Matter movement. In the United States itself, Colorado Rapids’ Sierra Leone international Kei Kamara uploaded pictures of himself on Instagram previously protesting about the killing of Ahmaud Arbery, a 21-year-old black man who was shot in his neighbourhood in Georgia in February while jogging – with father and son Gregory and Travis McMichael accused of the murder. “I want to thank the rest of the world that’s NOT BLACK but standing for what they feel in their HEARTS is the RIGHT thing,” Kamara said on Instagram. “If you believe we all bleed the same, have only one life and no one is born racist, then let’s hold hands together and fix this for our kids and theirs.” Meanwhile, Ifunanyachi Achara, another player in the MLS, has put out a series of tweets expressing his fear of living as an African-American living in the United States. “It is not a US problem, but a world problem,” the Nigerian forward, 22, tweeted. Elsewhere, the captain of the South Africa women’s football team, Janine Van Wyk, simply asked – “When will the people of the world treat others equally regardless of race or gender?” Floyd’s killing has become a trigger to these reactions, with police officer Chauvin being charged with third-degree murder and first degree manslaughter days after video emerged of him kneeling on Floyd’s neck for nearly nine minutes to pin him down. Chauvin has since been charged with his murder and sacked.