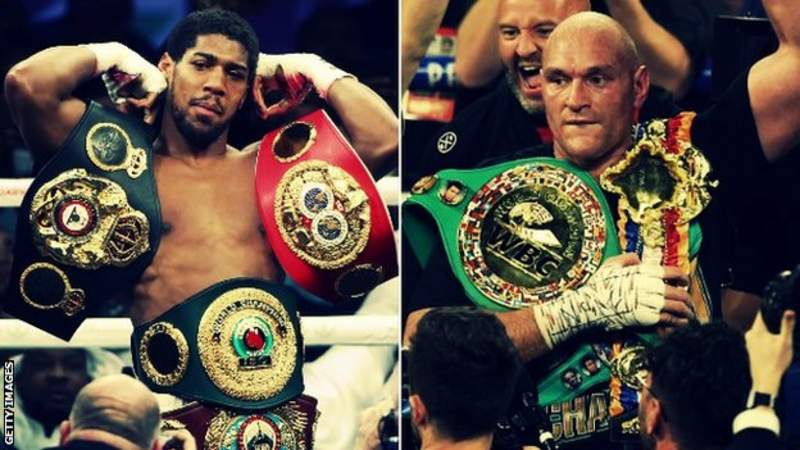 World heavyweight champions Anthony Joshua and Tyson Fury have agreed to a two-fight deal, says promoter Eddie Hearn. Talks over a historic bout for the undisputed title began in early May. Joshua, 30, holds the WBA, IBF and WBO belts while 31-year-old Fury is the WBC champion.

“It’s fair to say [Joshua and Fury] are in agreement regarding the financial terms,” Hearn, who is Joshua’s promoter, told Sky Sports News. “We’re in a good place. It’s fair to say that, in principle, both guys have agreed to that fight. Two fights.” Fury expressed his delight at the news in a social media post. The Manchester-born boxer said he would fight Joshua in 2021, but would first have to overcome the “hurdle in the road” Deontay Wilder, in a third meeting. Fury is contracted to fight the American, from whom he won the WBC title in February. Joshua, who reclaimed his world titles in December, has to face his mandatory challenger, Bulgaria’s Kubrat Pulev, when the sport fully resumes after the coronavirus shutdown. Hearn added: “There is still a lot to overcome. We are looking at venues and dates. “We’ve been talking to [Fury’s management team] MTK, giving them the assurances from Joshua’s side that all the details on the structure of the deal is approved from our side. And it is from Fury’s side, as well.”