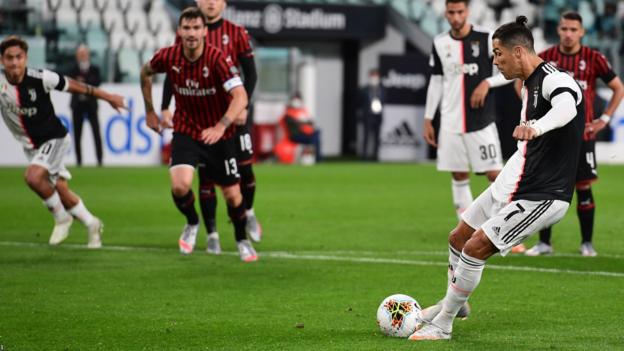 Thirteen-time winners Juventus reached the Coppa Italia final on the away goals rule at AC Milan’s expense as Italy’s football season restarted. After drawing 1-1 in Milan on 13 February, Juve could not find the net in a semi-final second leg played behind closed doors in Turin. Cristiano Ronaldo missed a penalty awarded for handball before Milan’s Ante Rebic was sent off.

It followed the Croatia forward’s 16th-minute foul on Danilo. Juventus, under former Chelsea boss Maurizio Sarri, will meet either Inter Milan or Napoli in Wednesday’s final in Rome. Napoli take a 1-0 lead into Saturday’s (8pm WAT) second leg. After both teams emerged separately from the tunnel before the game, there was a minute’s silence in memory of those who have died during the coronavirus pandemic, followed by applause for medical workers. With no fans present, at times the game sounded like a training session but the hosts were presented with a great chance to take the lead on the night when they were awarded a penalty after a video assistant referee (VAR) review for handball. However, Ronaldo’s effort hit the post and moments later Rebic was dismissed for an ugly challenge on former Manchester City full-back Danilo. Juventus did most of the pressing, Blaise Matuidi forcing a good save from Gianluigi Donnarumma, while Paulo Dybala also forced the keeper into a fine save towards the end.