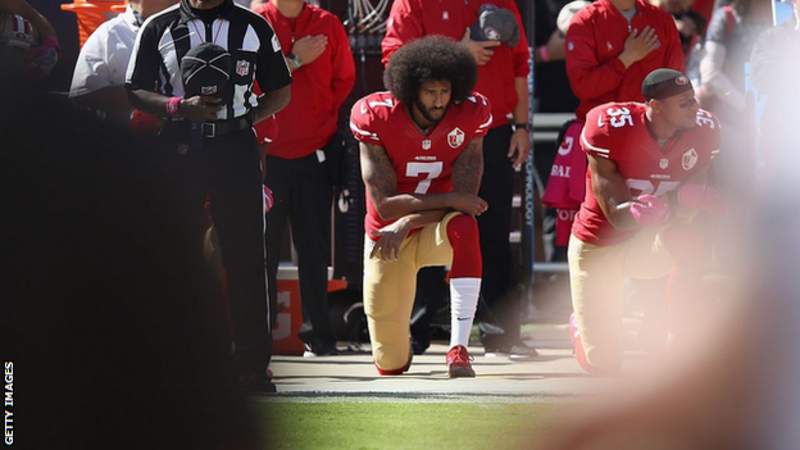 The NFL has pledged $250m over a 10-year period to help combat systemic racism in the United States. The fund will “support the battle against the ongoing and historic injustices faced by African Americans”. Last week, the NFL said players should be allowed to protest during the national anthem.

Kneeling for the anthem, a practice started by ex-San Francisco 49er Colin Kaepernick, was banned in May 2018, with the policy put on hold in July. Earlier this month, NFL players including Patrick Mahomes and Odell Beckham Jr called on the league to “condemn racism and the systemic oppression of black people”. Protests have taken place across the US and worldwide over the past three weeks following the death of George Floyd, an unarmed black man, while being restrained by a white police officer in Minneapolis on 25 May. The NFL said: “The NFL and our clubs will continue to work collaboratively with NFL players to support programs to address criminal justice reform, police reforms, and economic and educational advancement. “In addition to the financial commitment, we will continue to leverage the NFL Network and all of our media properties to place an increased emphasis on raising awareness and promoting education of social justice issues to our fans and help foster unity.”