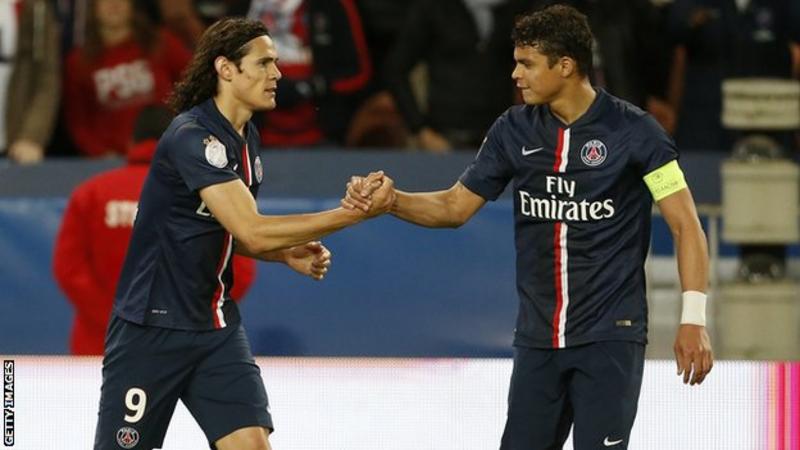 Edinson Cavani and Thiago Silva are set to leave Paris St-Germain this summer after the conclusion of the club’s Champions League campaign in August. Uruguay striker Cavani, 33, is PSG’s record scorer with 200 goals and Brazil defender Silva, 35, is club captain. “It was a difficult decision to make – they are players who made their mark on the club’s history,” sporting director Leonardo told Le Journal du Dimanche.

“The stories were so beautiful. But, yes, we are coming to the end.” He added: “We had to make a logical decision. Maybe we are wrong, I do not know – there is never a perfect moment. Now the Champions League is still in sight, and the idea is to continue competing with them until the end of August. How it can be done is not yet clear.” Both players’ contracts are due to expire on 30 June. Ligue 1 was cancelled in April, but the Champions League is due to be completed in August with a mini-tournament behind closed doors. PSG resume training on 22 June and are already through to the Champions League quarter-finals after beating Borussia Dortmund in March before football was suspended because of the coronavirus pandemic. Cavani had asked to leave the French champions in January amid interest from Spanish side Atletico Madrid, while he was also linked to Manchester United and Chelsea. Last month, PSG signed striker Mauro Icardi for 60m euros from Inter Milan. When asked if forwards Neymar and Kylian Mbappe would still be at the club next season, Leonardo said: “Nothing tells us otherwise. “They still have two years on their contracts and we’re more thinking about the future with them. We want to go forward.”