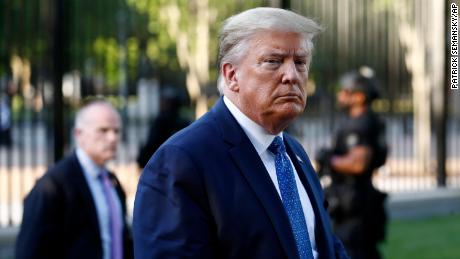 US President Donald Trump has threatened to boycott the NFL and US Soccer if players do not stand for the national anthem before matches. On Thursday, the United States Soccer Federation (USSF) voted to repeal its ban on players kneeling during the national anthem, admitting the policy was “wrong and detracted from the important message of Black Lives Matter”.

Republican congressman Matt Gaetz was critical of that decision, tweeting: “I’d rather the US not have a soccer team than have a soccer team that won’t stand for the National Anthem. “You shouldn’t get to play under our flag as our national team if you won’t stand when it is raised.” Trump retweeted that message on Saturday, before adding: “I won’t be watching much anymore!” He then posted: “And it looks like the NFL is heading in that direction also, but not with me watching!” The ban on kneeling during the anthem was originally put in place after US women’s player Megan Rapinoe kneeled during the national anthem in support of former NFL quarterback Colin Kaepernick in 2016. It received heavy backlash from Trump and others who said it was disrespectful to the American flag and the country. Earlier this week, Trump was also critical of NFL commissioner Roger Goodell and accused him of changing the league’s position on players kneeling during the national anthem. Goodell shared a video message of inclusiveness and racial equality in which he said the NFL will encourage players to speak out and protest following the death of George Floyd in Minneapolis on May 25. The NFL has overturned its own policy that called for punishing players who kneeled during the anthem.