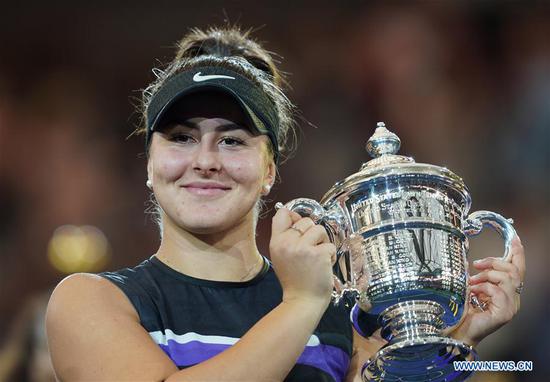 The US Open will be held without fans from 31 August to 13 September, after plans were approved by governor of New York Andrew Cuomo. The Grand Slam will be held at Flushing Meadows, despite some players voicing concerns about travelling to New York. There have been no professional tennis events since March because of the coronavirus pandemic.

“We can showcase tennis as the ideal social distancing sport,” US Tennis Association chief Mike Dowse said. Cuomo wrote that “extraordinary precautions” would be in place to protect players, including coronavirus testing and extra locker room space. The United States has the highest number of coronavirus cases and the highest death toll in the world and New York is the hardest-hit state, with more than 30,000 deaths. “We recognise the tremendous responsibility of hosting one of the first global sporting events in these challenging times,” a USTA statement read. “We will do so in the safest manner possible, mitigating all potential risks.” Further details about the tournament will be announced on Wednesday. Queens, the New York borough where the US Open is held at Flushing Meadows, has the second-highest death toll of any county in the US. The Billie Jean King National Tennis Centre, where the Slam is held, was turned into a temporary hospital to help with the crisis. Australia’s Nick Kyrgios called tournament organisers “selfish” for pushing ahead with the event. Defending men’s champion Rafael Nadal previously said he “had little desire” to play the event, while world number one Novak Djokovic has called the proposed protocols “extreme”. The Western and Southern Open, which usually takes place in Cincinnati just before the US Open, has been moved to New York and will also be staged at the Billie Jean King National Tennis Centre. The ATP and the WTA are expected to release a more detailed summer and autumn calendar on Wednesday.