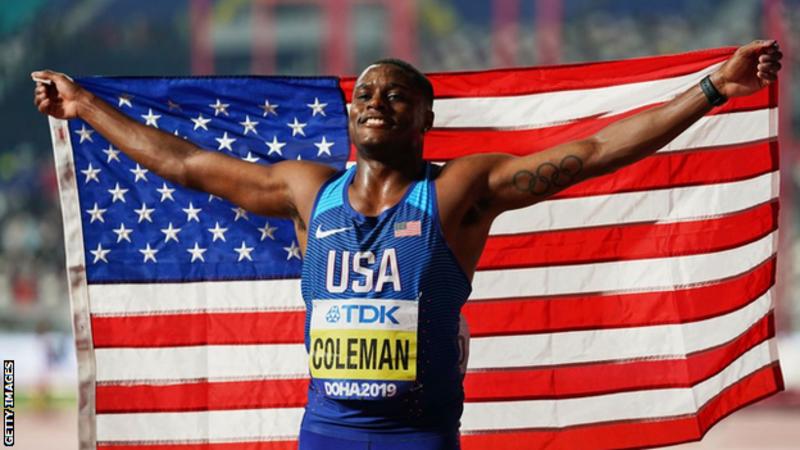 World 100m champion Christian Coleman has been provisionally suspended after missing a third doping test. The American, 24, has disputed the third whereabouts failure, on 9 December, which has been confirmed by the Athletics Integrity Unit (AIU). He claims he was Christmas shopping “five minutes away” from home and the tester made no effort to contact him.

“I have never and will never use performance enhancing supplements or drugs,” Coleman posted on social media. “I am willing to take a drug test every single day for the rest of my career for all I care to prove my innocence. “I have nothing to hide but it’s not possible to show that if I’m not even given a chance to.” Coleman says he has been contacted by phone “literally every other time” he has been tested, and claimed the AIU tester wrote an incorrect address on his unsuccessful attempt form. The AIU does not regard Coleman’s explanation for the missing test as a defence, as it is not their policy to call an athlete if they’re not at the designated address. According to the AIU’s out-of-competition testing guidelines, athletes are accountable for missed tests if they are not at their specified location for the one-hour period they have stated. If they are not at the location, the tester must wait for the full 60 minutes before leaving. Coleman – who won his first major title at the World Championships in Doha last year – had previously missed a test on 16 January 2019 and experienced a filing failure on 26 April 2019. Three whereabouts failures in a 12-month period can result in a ban of up to two years by the AIU. “The system must change,” he said. “I thought the point of the organisation was to keep the sport clean by testing everyone and catching cheaters, not attempt to catch people when they’re not home and make no attempt to actually test them and mess with the livelihoods of people who are clearly not doping. “This isn’t justice for anybody.” The AIU has not yet responded to Coleman’s claims. His chances of competing in Doha last August had looked slim after the US Anti-Doping Agency (Usada) charged Coleman with missing three drugs tests in 12 months. However, it then withdrew the case after it was proved there had been a filing irregularity regarding the date of the first missed test. In a statement on Wednesday Usada said: “We can confirm the latest proceeding involving Mr Coleman and we are collaborating with the AIU on the matter. “As in all cases, a person charged with a potential anti-rule violation is presumed innocent unless and until found to have committed a violation through the established process.” Earlier this month, Bahraini world 400m champion Salwa Eid Naser was provisionally suspended after missing four doping tests.