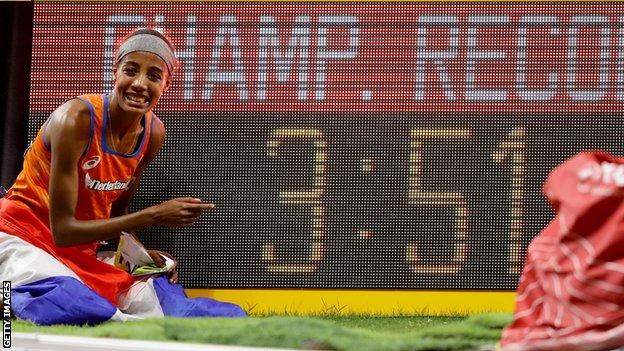 An emotional Sifan Hassan defended herself after winning 1500m World Championship gold, saying she is a clean athlete despite her coach being banned for doping violations. Alberto Salazar, who has been Hassan’s coach since 2016, was given a four-year ban earlier this week.

The Dutchwoman previously won the 10,000m title in Doha and set a championship record to win the 1500m. “This was a very hard week for me and I was just so angry,” Hassan, 26, said. Salazar, who runs the Nike Oregon Project, has denied any wrongdoing. “I’ve been clean all my life. I work hard,” Hassan said after her 1500m victory. “I couldn’t talk to anyone. I just ran all out. “I just want to show people that hard work can be better than everything.” The decision to ban Salazar followed a four-year investigation by the US Anti-Doping Agency (Usada) and a two-year court battle. American Salazar, who coaches several athletes at the World Championships in Doha but has had his accreditation revoked, said he was “shocked” by the outcome and would appeal. Hassan became the first athlete of either gender to win both the 1500m and 10,000m at a world championships. Her time of three minutes 51.95 seconds in Doha was the sixth-fastest in the 1500m in history. She is the mile world record holder and won 5,000m European gold in 2018, and said she would welcome any investigation into her performances. “The door is open. If they’re going to test me every day, I’m open for it,” she said. “How do people think we are cheating? They think I don’t get tested? I get tested every time. “We are always clean. We always stay clean. We work hard.” Hassan added she would make a decision on her future with the Nike Oregon Project now her championships had finished. “I did my best here to show the world that I’m clean, I’m always clean, I will be clean,” Hassan said. “Since 2014 I’ve been a top athlete and suddenly I get a hard time at this championships.”