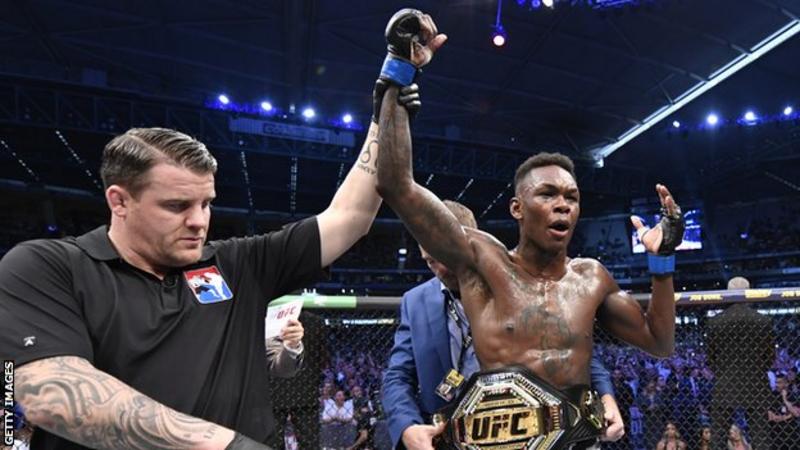 New Zealand’s Israel Adesanya extended his perfect professional record to 18-0 as he dethroned UFC middleweight champion Robert Whittaker in spectacular fashion at UFC 243 in Melbourne, Australia. The Nigerian born Adesanya, 30, arrived in the arena to an acrobatic choreographed dance routine and produced a near-punch-perfect performance to finish Whittaker after three minutes and 33 seconds of the second round and capture the undisputed UFC middleweight title in front of nearly 60,000 fans at Marvel Stadium.

Whittaker started out throwing a host of power shots but Adesanya was loose and slick on his feet in the opening round, and delivered a stunning right hand in the final seconds that sent Whittaker crashing to the canvas as the buzzer saved the champion from a first-round defeat. A similar counter right hook from Adesanya found its mark early in the second round as the interim champion began to turn up the heat, but a powerful left from the defending champion showed the challenger would have to be on his guard against Whittaker’s power. And, as the pair started to trade big shots in the middle of the octagon, Adesanya planted his feet and answered a straight right from Whittaker with a stunning right-left combination to send him down, with referee Marc Goddard stepping in to spare the Australian further punishment as the Kiwi moved in to apply the finishing touches on the ground. Former kickboxing star Adesanya exploded onto the global MMA scene only last year after arriving in the UFC with an undefeated 11-0 record. The Kiwi then reeled off six successive wins inside the octagon, culminating in his victory over Kelvin Gastelum at UFC 236 in April that saw him capture the interim middleweight title in a Fight of the Year contender in Atlanta. That victory set up an all-Antipodean clash with returning world champion Whittaker in Melbourne, with the bout pitting the hard-hitting Australian against the undefeated rising star from New Zealand. The event set a new attendance record for the UFC, with 57,127 fans packing Marvel Stadium on fight night. That figure topped the previous record of 56,214 held by the same stadium at UFC 193, when Holly Holm dramatically knocked out Ronda Rousey to capture the UFC women’s bantamweight title back in November 2015. And, on the biggest stage of his career, Adesanya stepped up and delivered a huge performance to cap his journey from fan to world champion. “I was in the nosebleeds,” he told UFC commentator Jon Anik in his post-fight interview. “Now I made his nose bleed. “He threw everything we expected. We had everything from his Plan A, Plan B, Plan C. We had everything up to Plan Z.” Adesanya’s first test as undisputed middleweight champion looks set to come against hulking Brazilian contender Paulo Costa, who was a prominent figure at cageside on fight night. Like Adesanya, “Borrachinha” (translation: “The Eraser”) is also undefeated, and the Brazilian has blitzed his way to the number-one contender spot with four straight TKO finishes, followed by a hard-earned decision win over Cuba’s former Olympic wrestler Yoel Romero. Now the 28-year-old from Belo Horizonte looks set to challenge Adesanya, and has already made no secret of his dislike for the self-confident Kiwi, labelling him “skinny”, while the new champion described the musclebound Brazilian as looking like an “over-inflated balloon animal”.