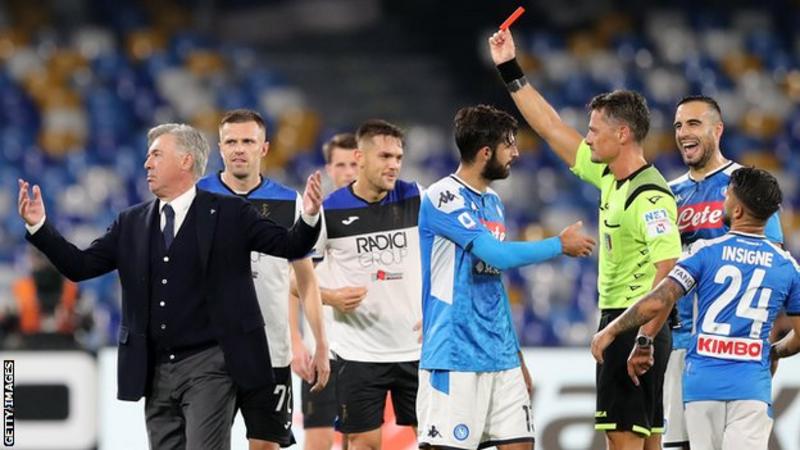 Napoli president Aurelio de Laurentiis says “buffoonery from the referee” led to coach Carlo Ancelotti and his assistant being sent off in the 2-2 Serie A draw with Atalanta. In a fiery end to the game, Josip Ilicic’s 86th-minute equaliser stood after a long VAR review, as Napoli appealed for a penalty. Ancelotti and his assistant were then shown red cards for protesting.

“Without us, the referees would be peeling potatoes,” De Laurentiis said. “If there is VAR it’s pointless creating eight minutes of additional time because all that happens is pushing and shouting,” he told Sky Sport Italia. “And what is this buffoonery from the referee [Pino Giacomelli] who kicks out a gentleman like Ancelotti? We’re fed up. We’re tired of paying for this standard of officiating.” The controversy started with Napoli forward Fernando Llorente colliding with Simon Kjaer in the Atalanta area with the visitors countering and scoring through Ilicic. A five-minute interruption followed before the referee awarded the goal without reviewing the incident on the touchline monitor. Ancelotti said: “I consider what happened an attack on my professionalism, my players and my club.” Goals from Serbian defender Nikola Maksimovic and Polish forward Arkadiusz Milik had twice given the hosts the lead, with Remo Freuler scoring for the visitors before the late flashpoint. Atalanta stay third in the table, five points behind leaders Juventus who won 2-1 against Genoa, with Napoli in sixth.