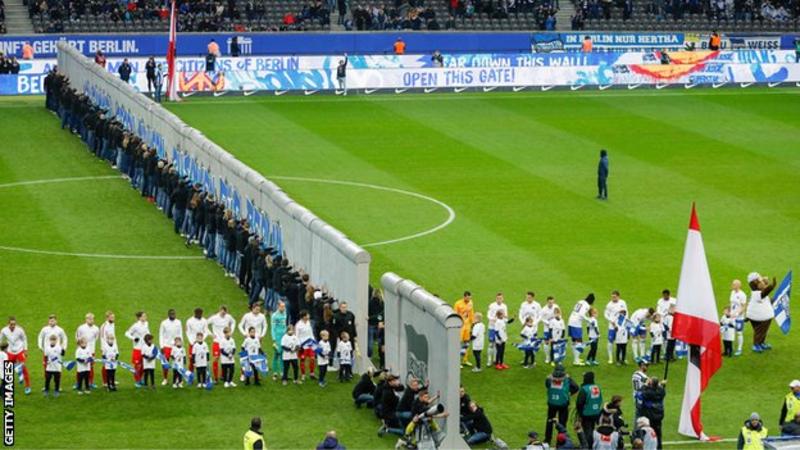 Hertha Berlin marked the 30th anniversary of the fall of the Berlin Wall by knocking over a replica before their Bundesliga game on Saturday. The wall had separated Soviet-controlled East Berlin and capitalist West Berlin during the Cold War.

A lightweight version – bearing the message “against walls together with Berlin” – was erected on the halfway line and demolished before kick-off. Hertha were beaten 4-2 by RB Leipzig at the Olympic Stadium. The Berlin side also wore retro shirts from the 1989-90 season to mark the occasion. “We’re playing in a retro jersey to remind us, and the whole of Germany, of Hertha Berlin’s first match, which East and West Berliners were able to experience together in the Olympic Stadium,” said Hertha board member Paul Keuter. Maximilian Mittelstaedt put the home side in front before Timo Werner equalised with a penalty. Leipzig took the lead through Marcel Sabitzer with a deflected effort and Kevin Kampl drilled in their third. Werner struck his 11th goal of the campaign in stoppage time before Davie Selke scored a consolation for Hertha.